Owens Corning (NYSE:OC) VP Daniel T. Smith sold 7,969 shares of Owens Corning stock in a transaction that occurred on Wednesday, November 13th. The stock was sold at an average price of $64.72, for a total transaction of $515,753.68. Following the transaction, the vice president now directly owns 65,353 shares in the company, valued at $4,229,646.16. The transaction was disclosed in a document filed with the Securities & Exchange Commission, which is accessible through this link.

Owens Corning (NYSE:OC) last issued its earnings results on Wednesday, October 23rd. The construction company reported $1.63 earnings per share (EPS) for the quarter, topping the consensus estimate of $1.50 by $0.13. Owens Corning had a net margin of 6.99% and a return on equity of 12.14%. The firm had revenue of $1.88 billion for the quarter, compared to analysts’ expectations of $1.86 billion. During the same quarter last year, the business earned $1.54 earnings per share. The business’s revenue was up 3.6% on a year-over-year basis. As a group, equities analysts predict that Owens Corning will post 4.61 EPS for the current fiscal year.

The company also recently announced a quarterly dividend, which was paid on Monday, November 4th. Stockholders of record on Tuesday, October 15th were issued a $0.22 dividend. This represents a $0.88 annualized dividend and a dividend yield of 1.35%. The ex-dividend date of this dividend was Friday, October 11th. Owens Corning’s dividend payout ratio is 17.81%. 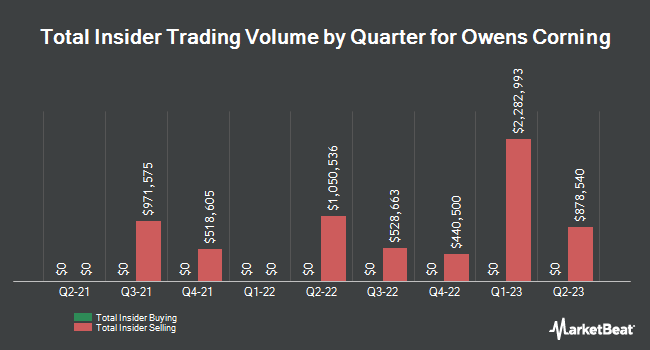