Complete the form below to receive the latest headlines and analysts' recommendations for Ollie's Bargain Outlet with our free daily email newsletter:

On average, analysts expect that Ollie’s Bargain Outlet will report full year earnings of $1.97 per share for the current financial year, with EPS estimates ranging from $1.94 to $2.00. For the next year, analysts forecast that the company will report earnings of $2.32 per share, with EPS estimates ranging from $2.22 to $2.44. Zacks Investment Research’s earnings per share calculations are an average based on a survey of research firms that follow Ollie’s Bargain Outlet.

Ollie’s Bargain Outlet (NASDAQ:OLLI) last released its quarterly earnings data on Wednesday, August 28th. The company reported $0.35 EPS for the quarter, missing the Zacks’ consensus estimate of $0.46 by ($0.11). The business had revenue of $333.90 million during the quarter, compared to analyst estimates of $339.83 million. Ollie’s Bargain Outlet had a net margin of 10.37% and a return on equity of 12.67%. The firm’s revenue was up 15.9% on a year-over-year basis. During the same quarter in the previous year, the company posted $0.40 EPS.

In other news, Director Stanley Fleishman acquired 2,000 shares of Ollie’s Bargain Outlet stock in a transaction dated Wednesday, September 11th. The shares were acquired at an average cost of $64.66 per share, for a total transaction of $129,320.00. Following the acquisition, the director now owns 43,974 shares of the company’s stock, valued at $2,843,358.84. The acquisition was disclosed in a legal filing with the SEC, which is accessible through the SEC website. Also, SVP Kevin Mclain sold 5,750 shares of the firm’s stock in a transaction on Monday, November 11th. The shares were sold at an average price of $65.39, for a total transaction of $375,992.50. Following the completion of the sale, the senior vice president now owns 5,750 shares in the company, valued at $375,992.50. The disclosure for this sale can be found here. 16.36% of the stock is currently owned by company insiders. 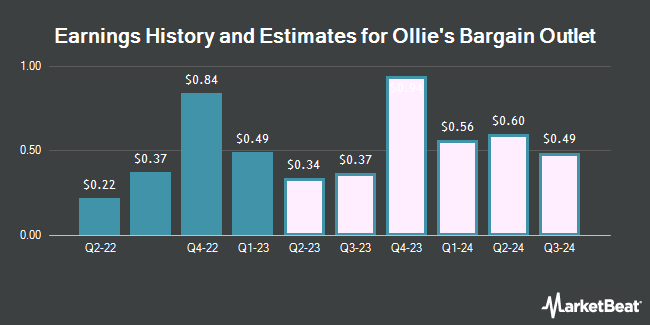 Odyssey Trading Down 1.8% This Week