Complete the form below to receive the latest headlines and analysts' recommendations for Tocagen with our free daily email newsletter:

Equities research analysts predict that Tocagen Inc (NASDAQ:TOCA) will announce earnings per share (EPS) of ($0.51) for the current fiscal quarter, Zacks reports. Zero analysts have issued estimates for Tocagen’s earnings, with estimates ranging from ($0.55) to ($0.46). Tocagen posted earnings of ($0.96) per share during the same quarter last year, which indicates a positive year-over-year growth rate of 46.9%. The firm is expected to report its next earnings report on Wednesday, February 26th.

On average, analysts expect that Tocagen will report full year earnings of ($2.62) per share for the current year, with EPS estimates ranging from ($2.91) to ($1.83). For the next year, analysts anticipate that the company will report earnings of ($1.60) per share, with EPS estimates ranging from ($2.59) to ($0.24). Zacks Investment Research’s earnings per share averages are a mean average based on a survey of research analysts that follow Tocagen.

Tocagen (NASDAQ:TOCA) last released its earnings results on Tuesday, November 12th. The company reported ($0.78) earnings per share for the quarter, missing analysts’ consensus estimates of ($0.68) by ($0.10). The company had revenue of $0.01 million during the quarter, compared to the consensus estimate of $0.01 million. Tocagen had a negative net margin of 201,488.91% and a negative return on equity of 182.15%.

Tocagen Inc, a clinical-stage cancer-selective gene therapy company, focuses on developing and commercializing product candidates designed to activate a patient's immune system against their cancer. Its cancer-selective gene therapy platform is built on retroviral replicating vectors (RRVs), which are designed to deliver therapeutic genes into the DNA of cancer cells.

Featured Article: What causes a stock to be most active? 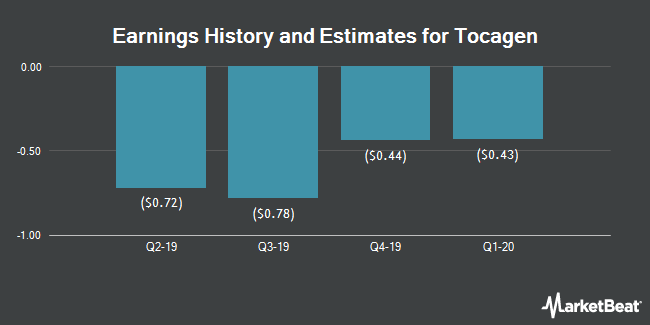 Receive News & Ratings for Tocagen Daily - Enter your email address below to receive a concise daily summary of the latest news and analysts' ratings for Tocagen and related companies with MarketBeat.com's FREE daily email newsletter.