Burlington Stores Inc (NYSE:BURL) CMO Jennifer Vecchio sold 17,016 shares of the business’s stock in a transaction dated Friday, November 29th. The shares were sold at an average price of $226.00, for a total value of $3,845,616.00. Following the completion of the sale, the chief marketing officer now directly owns 40,060 shares of the company’s stock, valued at $9,053,560. The sale was disclosed in a legal filing with the Securities & Exchange Commission, which can be accessed through this hyperlink.

Burlington Stores (NYSE:BURL) last posted its earnings results on Tuesday, November 26th. The company reported $1.55 EPS for the quarter, beating the Thomson Reuters’ consensus estimate of $1.41 by $0.14. The company had revenue of $1.78 billion during the quarter, compared to analyst estimates of $1.79 billion. Burlington Stores had a return on equity of 145.12% and a net margin of 6.26%. The business’s revenue was up 8.6% compared to the same quarter last year. During the same period in the prior year, the company earned $1.21 earnings per share. As a group, analysts predict that Burlington Stores Inc will post 7.34 EPS for the current fiscal year. 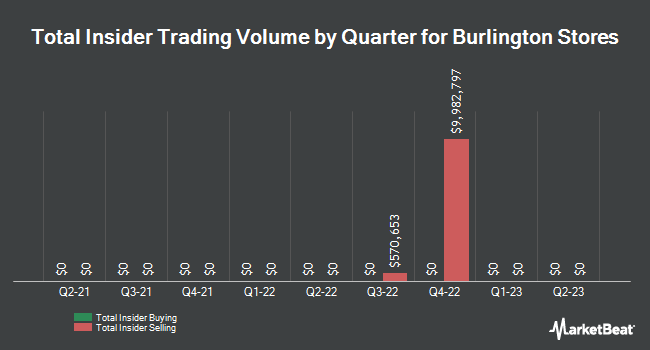