Complete the form below to receive the latest headlines and analysts' recommendations for Mellanox Technologies with our free daily email newsletter:

Mellanox Technologies (NASDAQ:MLNX) was downgraded by Zacks Investment Research from a “hold” rating to a “sell” rating in a report issued on Thursday, Zacks.com reports. They presently have a $125.00 price objective on the semiconductor producer’s stock. Zacks Investment Research‘s target price suggests a potential upside of 9.12% from the company’s previous close.

According to Zacks, “Mellanox is benefiting from robust demand for Ethernet adapters, switches and LinkX cables. Solid demand of its Gigabit EDR solutions in AI, HPC, ML, database, and storage bode well. Further, strong adoption of Mellanox’s InfiniBand solutions is a key catalyst. The company has also won several contracts from the likes of NetApp and NASA Ames Research Center, which reflects sturdy demand for its solutions. Notably, NVIDIA inked a definitive agreement to acquire Mellanox for a total enterprise value of around $6.9 billion. The buyout is slated to close by the end of calendar 2019. However, exposure to foreign currency and significant customer concentration remain headwinds. Notably, shares of Mellanox have underperformed the industry in the past year.”

MLNX has been the topic of several other research reports. BidaskClub raised shares of Mellanox Technologies from a “strong sell” rating to a “sell” rating in a report on Wednesday, November 27th. ValuEngine downgraded Mellanox Technologies from a “hold” rating to a “sell” rating in a research report on Wednesday, August 28th. Three analysts have rated the stock with a sell rating and seven have given a hold rating to the company. The stock presently has an average rating of “Hold” and an average target price of $124.19.

Mellanox Technologies (NASDAQ:MLNX) last posted its earnings results on Wednesday, October 30th. The semiconductor producer reported $1.69 earnings per share (EPS) for the quarter, topping the Thomson Reuters’ consensus estimate of $1.58 by $0.11. Mellanox Technologies had a net margin of 14.03% and a return on equity of 18.84%. The business had revenue of $335.30 million for the quarter, compared to analysts’ expectations of $315.59 million. During the same period in the prior year, the company posted $1.33 EPS. The business’s revenue for the quarter was up 20.1% compared to the same quarter last year. As a group, sell-side analysts predict that Mellanox Technologies will post 5.06 EPS for the current year. 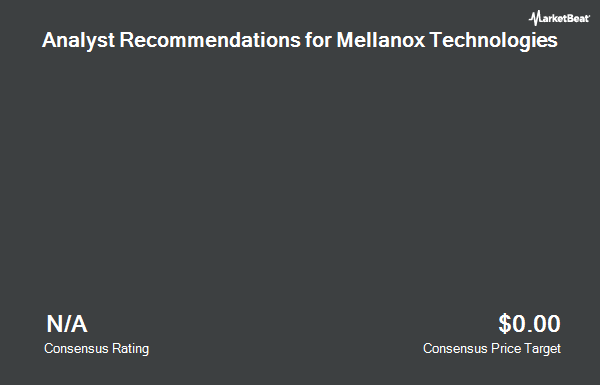