Complete the form below to receive the latest headlines and analysts' recommendations for Glaukos with our free daily email newsletter:

$59.96 Million in Sales Expected for Glaukos Corp (NYSE:GKOS) This Quarter

Equities analysts predict that Glaukos Corp (NYSE:GKOS) will report $59.96 million in sales for the current fiscal quarter, according to Zacks. Three analysts have issued estimates for Glaukos’ earnings. The highest sales estimate is $60.50 million and the lowest is $59.48 million. Glaukos posted sales of $54.08 million during the same quarter last year, which suggests a positive year-over-year growth rate of 10.9%. The business is expected to announce its next quarterly earnings report on Wednesday, February 26th.

On average, analysts expect that Glaukos will report full year sales of $231.11 million for the current fiscal year, with estimates ranging from $230.62 million to $231.70 million. For the next year, analysts expect that the company will post sales of $268.60 million, with estimates ranging from $267.30 million to $269.90 million. Zacks Investment Research’s sales averages are a mean average based on a survey of sell-side research firms that cover Glaukos.

Glaukos (NYSE:GKOS) last issued its earnings results on Wednesday, November 6th. The medical instruments supplier reported ($0.10) earnings per share for the quarter, topping the consensus estimate of ($0.17) by $0.07. Glaukos had a negative net margin of 8.60% and a negative return on equity of 4.01%. The company had revenue of $58.51 million during the quarter, compared to the consensus estimate of $56.96 million. During the same quarter in the prior year, the firm posted ($0.17) EPS. Glaukos’s quarterly revenue was up 33.2% compared to the same quarter last year.

A number of research firms have recently weighed in on GKOS. ValuEngine raised Glaukos from a “buy” rating to a “strong-buy” rating in a research note on Friday, November 29th. Zacks Investment Research upgraded Glaukos from a “sell” rating to a “hold” rating and set a $76.00 target price for the company in a research report on Thursday, September 12th. JPMorgan Chase & Co. set a $90.00 target price on Glaukos and gave the company a “buy” rating in a research note on Thursday, October 10th. BTIG Research reissued a “hold” rating on shares of Glaukos in a report on Wednesday, October 30th. Finally, Bank of America downgraded Glaukos from a “buy” rating to an “underperform” rating and set a $67.00 price target for the company. in a research note on Monday, September 30th. One investment analyst has rated the stock with a sell rating, three have issued a hold rating, five have given a buy rating and one has issued a strong buy rating to the company’s stock. The stock has an average rating of “Buy” and an average price target of $74.75.

In other Glaukos news, CFO Joseph E. Gilliam sold 2,500 shares of the business’s stock in a transaction on Thursday, September 12th. The shares were sold at an average price of $73.25, for a total value of $183,125.00. The sale was disclosed in a legal filing with the SEC, which is accessible through this hyperlink. Over the last quarter, insiders sold 10,881 shares of company stock worth $716,702. 8.70% of the stock is currently owned by insiders.

Glaukos Corporation, an ophthalmic medical technology and pharmaceutical company, focuses on the development and commercialization of surgical devices and sustained pharmaceutical therapies designed to treat glaucoma. It offers iStent, a micro-bypass stent for insertion in conjunction with cataract surgery for the reduction of intraocular pressure in adult patients with mild-to-moderate open-angle glaucoma; and iStent inject trabecular micro-bypass stent that allows the surgeon to inject stents into various trabecular meshwork locations through a single corneal entry for the reduction of intraocular pressure in mild-to-moderate open-angle glaucoma in combination with cataract surgery. 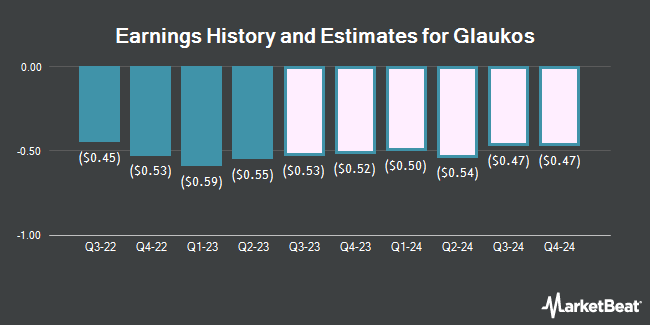 Receive News & Ratings for Glaukos Daily - Enter your email address below to receive a concise daily summary of the latest news and analysts' ratings for Glaukos and related companies with MarketBeat.com's FREE daily email newsletter.