Complete the form below to receive the latest headlines and analysts' recommendations for Kraft Heinz with our free daily email newsletter:

BidaskClub upgraded shares of Kraft Heinz (NASDAQ:KHC) from a hold rating to a buy rating in a research note issued to investors on Friday, BidAskClub reports.

The firm also recently declared a quarterly dividend, which will be paid on Friday, December 13th. Stockholders of record on Friday, November 15th will be issued a dividend of $0.40 per share. The ex-dividend date is Thursday, November 14th. This represents a $1.60 dividend on an annualized basis and a dividend yield of 5.15%. Kraft Heinz’s dividend payout ratio (DPR) is presently 45.33%.

In related news, major shareholder Global Food Holdings Lp 3G sold 25,068,657 shares of the company’s stock in a transaction dated Monday, September 16th. The shares were sold at an average price of $28.44, for a total value of $712,952,605.08. The transaction was disclosed in a filing with the Securities & Exchange Commission, which is accessible through this hyperlink. Also, Director Jorge P. Lemann acquired 3,496,503 shares of Kraft Heinz stock in a transaction that occurred on Monday, September 16th. The stock was bought at an average cost of $28.60 per share, with a total value of $99,999,985.80. Following the acquisition, the director now directly owns 3,516,449 shares of the company’s stock, valued at $100,570,441.40. The disclosure for this purchase can be found here. Insiders own 0.29% of the company’s stock. 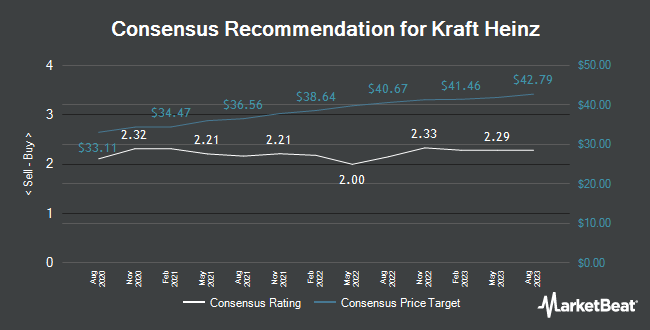