Complete the form below to receive the latest headlines and analysts' recommendations for Amicus Therapeutics with our free daily email newsletter:

Posted by Samantha Reynolds on Dec 9th, 2019 // Comments off

On average, analysts expect that Amicus Therapeutics will report full-year earnings of ($1.41) per share for the current financial year, with EPS estimates ranging from ($1.50) to ($1.33). For the next fiscal year, analysts expect that the company will report earnings of ($0.87) per share, with EPS estimates ranging from ($1.11) to ($0.70). Zacks Investment Research’s earnings per share averages are an average based on a survey of research analysts that that provide coverage for Amicus Therapeutics.

Amicus Therapeutics (NASDAQ:FOLD) last announced its earnings results on Monday, November 11th. The biopharmaceutical company reported ($0.24) earnings per share for the quarter, beating analysts’ consensus estimates of ($0.32) by $0.08. Amicus Therapeutics had a negative net margin of 216.02% and a negative return on equity of 62.61%. The business had revenue of $48.80 million for the quarter, compared to the consensus estimate of $48.05 million. During the same period last year, the firm posted ($0.84) earnings per share. Amicus Therapeutics’s quarterly revenue was up 136.9% on a year-over-year basis.

Amicus Therapeutics, Inc, a biotechnology company, engages in the discovery, development, and commercialization of medicines for various rare and orphan diseases. The company offers Galafold, an orally administered small molecule pharmacological chaperone for the treatment of Fabry disease. It is also conducting a Phase 1/2 clinical study of ATB200-02 for indications, including pompe disease.

See Also: What are economic reports? 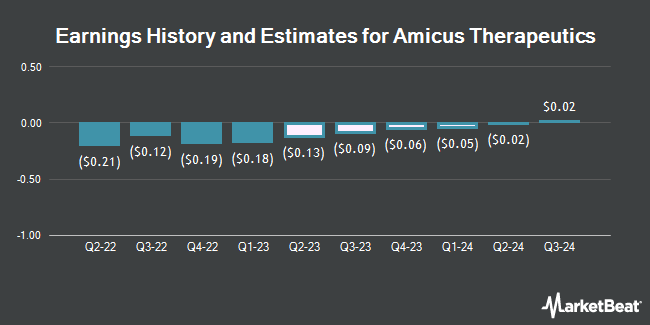 Joule Trading Down 4.4% Over Last 7 Days