Complete the form below to receive the latest headlines and analysts' recommendations for Public Storage with our free daily email newsletter:

Public Storage (PSA) to Issue Dividend of $2.00 on December 30th

Public Storage (NYSE:PSA) declared a dividend on Tuesday, October 29th, Fidelity reports. Shareholders of record on Friday, December 13th will be given a dividend of 2.00 per share by the real estate investment trust on Monday, December 30th. The ex-dividend date is Thursday, December 12th.

Public Storage (NYSE:PSA) last released its quarterly earnings data on Tuesday, October 29th. The real estate investment trust reported $1.93 EPS for the quarter, topping the Zacks’ consensus estimate of $1.90 by $0.03. Public Storage had a net margin of 60.98% and a return on equity of 33.96%. The firm had revenue of $729.33 million during the quarter, compared to analysts’ expectations of $732.26 million. During the same period in the previous year, the business posted $1.85 earnings per share. The company’s revenue for the quarter was up 3.3% compared to the same quarter last year. As a group, analysts anticipate that Public Storage will post 10.76 earnings per share for the current fiscal year. 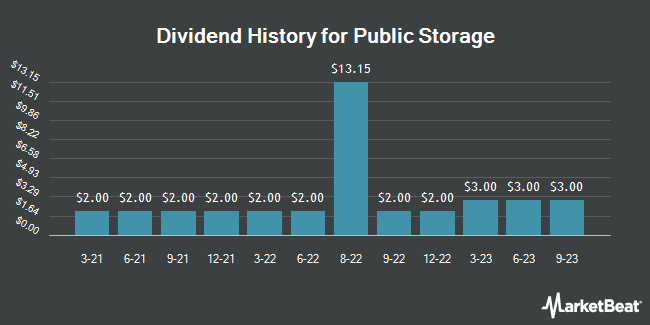