Complete the form below to receive the latest headlines and analysts' recommendations for IAA with our free daily email newsletter:

IAA (NYSE:IAA) Given Consensus Recommendation of “Buy” by Brokerages

IAA (NYSE:IAA) has earned an average recommendation of “Buy” from the ten brokerages that are currently covering the stock, MarketBeat Ratings reports. Two analysts have rated the stock with a hold rating and eight have assigned a buy rating to the company. The average 1 year target price among brokerages that have covered the stock in the last year is $51.60.

IAA (NYSE:IAA) last posted its quarterly earnings results on Tuesday, November 12th. The company reported $0.35 earnings per share (EPS) for the quarter, beating the Thomson Reuters’ consensus estimate of $0.33 by $0.02. The company had revenue of $357.30 million during the quarter, compared to the consensus estimate of $347.31 million. IAA’s quarterly revenue was up 11.3% on a year-over-year basis. During the same period in the prior year, the company posted $0.33 EPS. On average, equities analysts predict that IAA will post 1.59 earnings per share for the current fiscal year.

Recommended Story: How Do Investors Open a Backdoor Roth IRA? 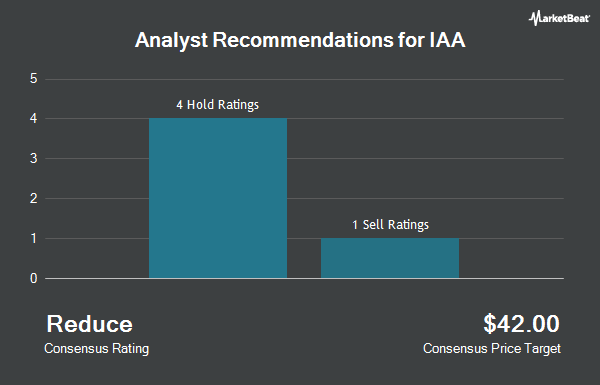 Receive News & Ratings for IAA Daily - Enter your email address below to receive a concise daily summary of the latest news and analysts' ratings for IAA and related companies with MarketBeat.com's FREE daily email newsletter.

-$0.25 Earnings Per Share Expected for INmune Bio Inc This Quarter

Micromines Trading Down 2.9% This Week