Complete the form below to receive the latest headlines and analysts' recommendations for MTS Systems with our free daily email newsletter:

MTS Systems has a payout ratio of 49.2% meaning its dividend is sufficiently covered by earnings.

MTS Systems (NASDAQ:MTSC) last announced its quarterly earnings data on Monday, November 25th. The scientific and technical instruments company reported $0.37 earnings per share (EPS) for the quarter, missing the Zacks’ consensus estimate of $0.39 by ($0.02). MTS Systems had a net margin of 4.83% and a return on equity of 9.78%. The business had revenue of $224.08 million during the quarter, compared to analysts’ expectations of $218.07 million. During the same period last year, the company posted $0.61 EPS. MTS Systems’s revenue for the quarter was up 13.2% on a year-over-year basis. On average, equities research analysts anticipate that MTS Systems will post 2.38 EPS for the current year.

See Also: What is the operating income formula? 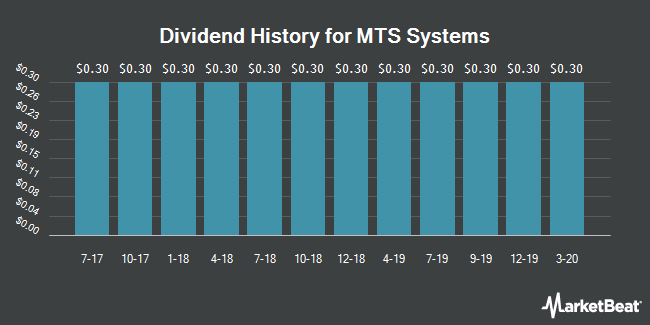