Complete the form below to receive the latest headlines and analysts' recommendations for Diana Shipping with our free daily email newsletter:

Equities research analysts expect Diana Shipping Inc (NYSE:DSX) to report $49.29 million in sales for the current fiscal quarter, according to Zacks. Three analysts have issued estimates for Diana Shipping’s earnings, with the highest sales estimate coming in at $50.27 million and the lowest estimate coming in at $48.54 million. Diana Shipping reported sales of $60.13 million in the same quarter last year, which would suggest a negative year-over-year growth rate of 18%. The business is scheduled to issue its next quarterly earnings results on Tuesday, February 25th.

On average, analysts expect that Diana Shipping will report full year sales of $209.46 million for the current year, with estimates ranging from $208.71 million to $210.43 million. For the next year, analysts forecast that the firm will report sales of $202.46 million, with estimates ranging from $180.31 million to $215.02 million. Zacks’ sales averages are a mean average based on a survey of sell-side research analysts that that provide coverage for Diana Shipping.

Diana Shipping Inc provides shipping transportation services. The company transports a range of dry bulk cargoes, including commodities, such as iron ore, coal, grain, and other materials in shipping routes through its ownership of dry bulk vessels worldwide. As of December 31, 2018, it operated a fleet of 48 dry bulk carriers comprising 20 Panamax, 5 Kamsarmax, 5 Post-Panamax, 14 Capesize, and 4 Newcastlemax vessels. 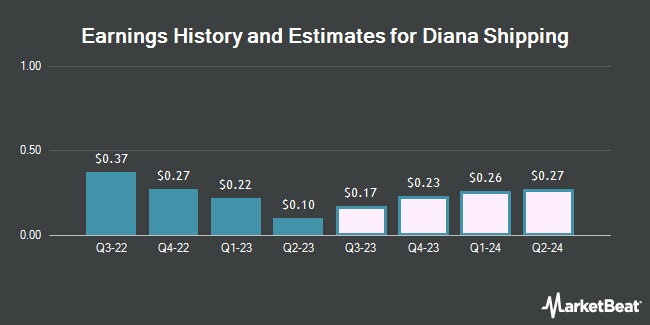