Complete the form below to receive the latest headlines and analysts' recommendations for BlackRock Muni New York Intr. Dur. Fnd. with our free daily email newsletter:

BlackRock Muni New York Intr. Dur. Fnd. (NYSE:MNE) announced a monthly dividend on Thursday, January 2nd, Zacks reports. Shareholders of record on Wednesday, January 15th will be paid a dividend of 0.036 per share by the investment management company on Monday, February 3rd. This represents a $0.43 annualized dividend and a yield of 2.78%. The ex-dividend date of this dividend is Tuesday, January 14th.

BlackRock Muni New York Intr. Dur. Fnd. has decreased its dividend payment by an average of 13.9% per year over the last three years.

In related news, major shareholder Saba Capital Management, L.P. acquired 16,270 shares of the stock in a transaction dated Thursday, December 12th. The shares were purchased at an average price of $14.27 per share, for a total transaction of $232,172.90. Insiders bought a total of 55,123 shares of company stock worth $792,384 in the last three months. 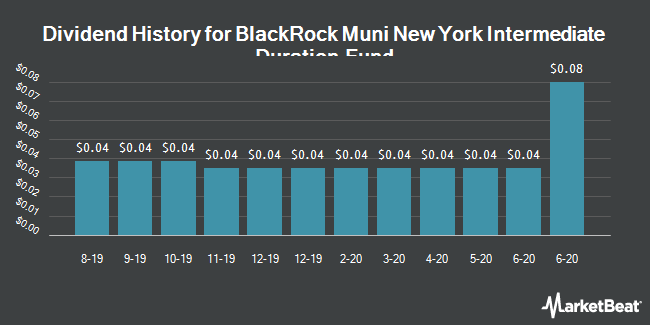 The First Bancshares Downgraded to Sell at ValuEngine

Danone Given a €76.00 Price Target by Credit Suisse Group Analysts

Unilever Given a €40.00 Price Target at Royal Bank of Canada