Complete the form below to receive the latest headlines and analysts' recommendations for Farfetch with our free daily email newsletter:

Farfetch (NYSE:FTCH) last posted its earnings results on Thursday, November 14th. The company reported ($0.28) earnings per share for the quarter, topping the Thomson Reuters’ consensus estimate of ($0.37) by $0.09. Farfetch had a negative net margin of 35.84% and a negative return on equity of 25.14%. The business had revenue of $255.50 million for the quarter, compared to analyst estimates of $248.31 million. During the same quarter in the prior year, the firm earned ($0.30) EPS. The firm’s quarterly revenue was up 93.3% compared to the same quarter last year. Equities analysts predict that Farfetch will post -1.14 EPS for the current fiscal year.

Farfetch Ltd. engages in the retail of fashion and luxury goods. It offers womenswear, menswear, kidswear, vintage, fine watches, and fine jewelry. The company was founded by José Manuel Ferreira Neves in 2007 and launched in 2008 and is headquartered in London, the United Kingdom. 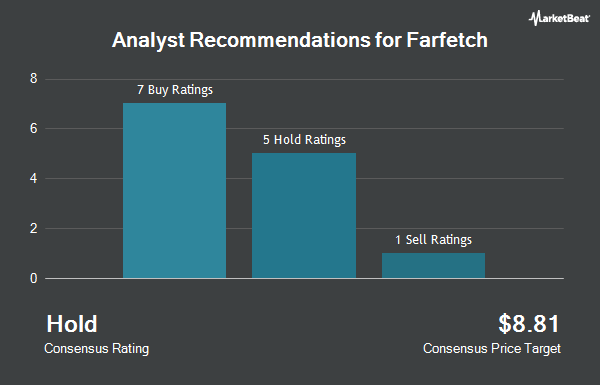 Receive News & Ratings for Farfetch Daily - Enter your email address below to receive a concise daily summary of the latest news and analysts' ratings for Farfetch and related companies with MarketBeat.com's FREE daily email newsletter.