Complete the form below to receive the latest headlines and analysts' recommendations for Banc of California with our free daily email newsletter:

Banc of California (NYSE:BANC) released its quarterly earnings data on Thursday. The bank reported $0.20 earnings per share for the quarter, topping the Thomson Reuters’ consensus estimate of $0.17 by $0.03, Briefing.com reports. Banc of California had a net margin of 4.79% and a return on equity of 7.67%. The firm had revenue of $61.59 million for the quarter, compared to the consensus estimate of $65.54 million. During the same quarter in the prior year, the company posted $0.13 earnings per share.

The firm also recently disclosed a quarterly dividend, which was paid on Thursday, January 2nd. Shareholders of record on Wednesday, December 18th were issued a dividend of $0.06 per share. The ex-dividend date was Tuesday, December 17th. This represents a $0.24 annualized dividend and a yield of 1.44%. Banc of California’s payout ratio is 48.98%.

About Banc of California

Banc of California, Inc operates as the bank holding company for Banc of California, National Association that provides banking products and services in the United States. The company offers deposit products, including checking, savings, money market, retirement, and interest and noninterest-bearing demand accounts, as well as certificates of deposits. 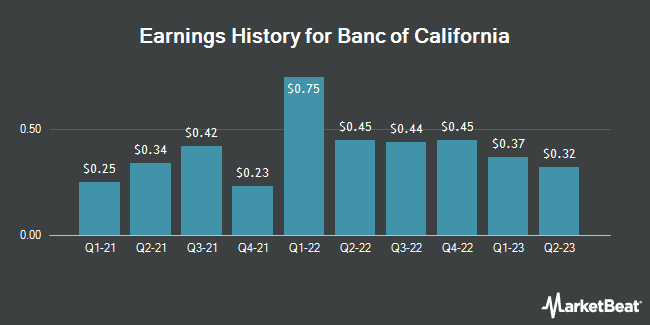