Complete the form below to receive the latest headlines and analysts' recommendations for Dermira with our free daily email newsletter:

Dermira (NASDAQ:DERM) was downgraded by analysts at Needham & Company LLC from a “buy” rating to a “hold” rating in a report issued on Friday, The Fly reports.

Dermira (NASDAQ:DERM) last issued its earnings results on Tuesday, November 5th. The biopharmaceutical company reported ($1.06) earnings per share (EPS) for the quarter, topping the consensus estimate of ($1.40) by $0.34. Dermira had a negative net margin of 256.08% and a negative return on equity of 583.07%. The firm had revenue of $11.53 million for the quarter, compared to analysts’ expectations of $11.07 million. As a group, equities analysts predict that Dermira will post -4.15 EPS for the current fiscal year.

In related news, Director Matthew K. Fust sold 3,000 shares of Dermira stock in a transaction on Thursday, December 12th. The shares were sold at an average price of $12.00, for a total value of $36,000.00. Following the sale, the director now owns 8,051 shares in the company, valued at $96,612. The transaction was disclosed in a document filed with the SEC, which is accessible through this hyperlink. Insiders own 12.40% of the company’s stock.

Dermira, Inc, a biopharmaceutical company, develops and commercializes therapies for patients with dermatologic diseases in the United States. The company offers QBREXZA, a topical once-daily anticholinergic cloth for the treatment of primary axillary hyperhidrosis in adult and pediatric patients nine years of age and older.

See Also: Is a Roth IRA right for you? 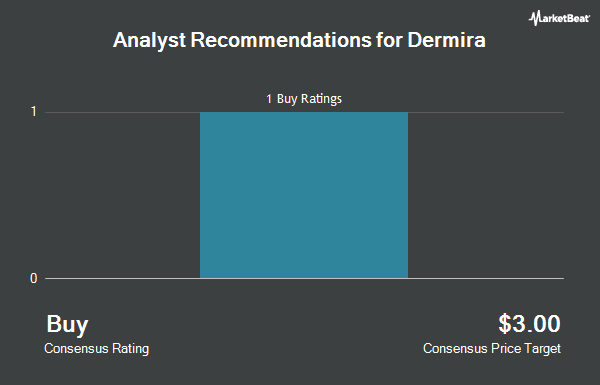 Receive News & Ratings for Dermira Daily - Enter your email address below to receive a concise daily summary of the latest news and analysts' ratings for Dermira and related companies with MarketBeat.com's FREE daily email newsletter.