Complete the form below to receive the latest headlines and analysts' recommendations for AMETEK with our free daily email newsletter:

AMETEK, Inc. (NYSE:AME) announced a quarterly dividend on Wednesday, February 12th, RTT News reports. Shareholders of record on Friday, March 13th will be paid a dividend of 0.18 per share by the technology company on Tuesday, March 31st. This represents a $0.72 annualized dividend and a yield of 0.71%. The ex-dividend date of this dividend is Thursday, March 12th. This is a positive change from AMETEK’s previous quarterly dividend of $0.14. 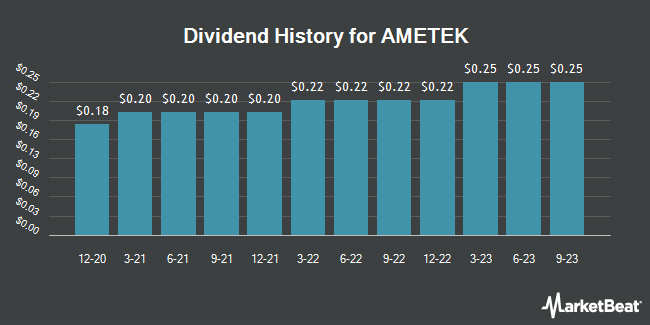 Receive News & Ratings for AMETEK Daily - Enter your email address below to receive a concise daily summary of the latest news and analysts' ratings for AMETEK and related companies with MarketBeat.com's FREE daily email newsletter.

Brokerages Expect Clearfield Inc Will Announce Earnings of $0.05 Per Share