Copa (NYSE:CPA) had its price target lifted by Buckingham Research from $125.00 to $131.00 in a research report sent to investors on Thursday, The Fly reports. Buckingham Research currently has a buy rating on the transportation company’s stock. The analysts noted that the move was a valuation call.

A number of other brokerages have also issued reports on CPA. Evercore ISI reissued a buy rating on shares of Copa in a report on Sunday, November 17th. ValuEngine raised shares of Copa from a sell rating to a hold rating in a report on Tuesday, January 28th. Finally, Deutsche Bank raised their price target on shares of Copa from $103.00 to $130.00 and gave the stock a buy rating in a report on Monday, November 18th. They noted that the move was a valuation call. Two analysts have rated the stock with a sell rating, three have issued a hold rating and nine have issued a buy rating to the company’s stock. Copa presently has a consensus rating of Buy and an average target price of $117.00.

Copa (NYSE:CPA) last announced its quarterly earnings results on Wednesday, February 12th. The transportation company reported $2.17 earnings per share (EPS) for the quarter, topping analysts’ consensus estimates of $1.98 by $0.19. The business had revenue of $681.90 million for the quarter, compared to analyst estimates of $675.10 million. Copa had a net margin of 3.29% and a return on equity of 15.24%. The company’s revenue was up 3.9% on a year-over-year basis. During the same quarter last year, the firm earned $1.04 EPS. Equities analysts anticipate that Copa will post 7.75 earnings per share for the current fiscal year.

The company also recently declared a quarterly dividend, which will be paid on Friday, March 13th. Shareholders of record on Friday, February 28th will be issued a $0.80 dividend. This represents a $3.20 dividend on an annualized basis and a yield of 2.91%. The ex-dividend date of this dividend is Thursday, February 27th. This is a positive change from Copa’s previous quarterly dividend of $0.65. Copa’s dividend payout ratio (DPR) is 39.88%. 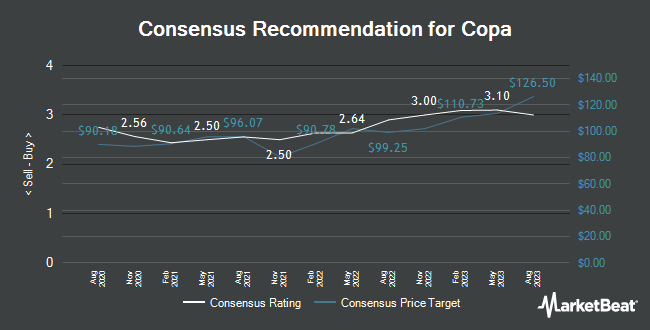