Brooks Automation, Inc (NASDAQ:BRKS) insider David C. Gray sold 500 shares of the business’s stock in a transaction dated Wednesday, February 12th. The shares were sold at an average price of $43.00, for a total value of $21,500.00. Following the sale, the insider now directly owns 83,375 shares of the company’s stock, valued at approximately $3,585,125. The transaction was disclosed in a legal filing with the Securities & Exchange Commission, which is accessible through the SEC website.

Brooks Automation (NASDAQ:BRKS) last announced its quarterly earnings data on Thursday, February 6th. The semiconductor company reported $0.23 EPS for the quarter, meeting the Thomson Reuters’ consensus estimate of $0.23. Brooks Automation had a return on equity of 6.41% and a net margin of 53.68%. The business had revenue of $210.50 million for the quarter, compared to the consensus estimate of $207.24 million. During the same period in the previous year, the business earned $0.17 earnings per share. The business’s revenue was up 17.4% on a year-over-year basis. On average, equities analysts expect that Brooks Automation, Inc will post 1.05 earnings per share for the current year.

The company also recently announced a quarterly dividend, which will be paid on Friday, March 27th. Investors of record on Friday, March 6th will be given a $0.10 dividend. The ex-dividend date of this dividend is Thursday, March 5th. This represents a $0.40 dividend on an annualized basis and a dividend yield of 0.97%. Brooks Automation’s dividend payout ratio is currently 51.95%. 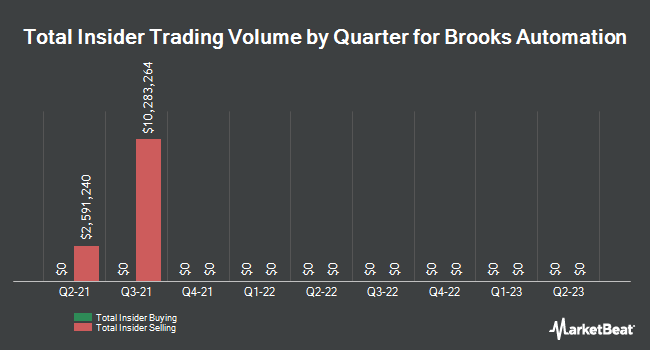 American Tower Price Target Increased to $273.00 by Analysts at KeyCorp