Complete the form below to receive the latest headlines and analysts' recommendations for Hologic with our free daily email newsletter:

Hologic (NASDAQ:HOLX) had its price target reduced by analysts at Barclays from $51.00 to $43.00 in a note issued to investors on Thursday, BenzingaRatingsTable reports. The brokerage presently has an “equal weight” rating on the medical equipment provider’s stock. Barclays‘s price objective would indicate a potential upside of 29.28% from the company’s previous close.

Hologic (NASDAQ:HOLX) last announced its earnings results on Wednesday, January 29th. The medical equipment provider reported $0.61 earnings per share for the quarter, meeting the consensus estimate of $0.61. The business had revenue of $850.50 million during the quarter, compared to the consensus estimate of $849.40 million. Hologic had a net margin of 7.30% and a return on equity of 30.47%. The business’s quarterly revenue was up 2.4% compared to the same quarter last year. During the same period in the prior year, the firm earned $0.58 earnings per share. Equities analysts expect that Hologic will post 2.64 earnings per share for the current year.

Featured Story: Pattern Day Trader – What is the PDT Rule? 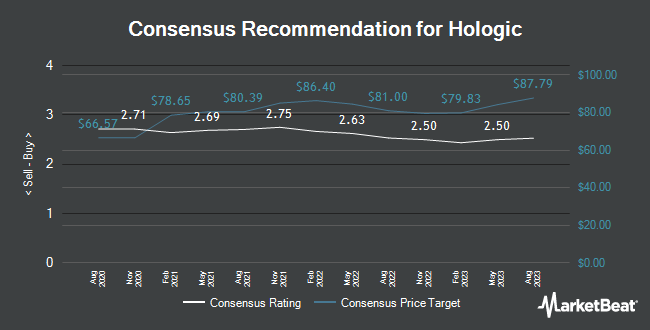 Receive News & Ratings for Hologic Daily - Enter your email address below to receive a concise daily summary of the latest news and analysts' ratings for Hologic and related companies with MarketBeat.com's FREE daily email newsletter.

Head to Head Analysis: Sonim Technologies vs. Its Peers