Complete the form below to receive the latest headlines and analysts' recommendations for Capital One Financial with our free daily email newsletter:

Capital One Financial Corp. (NYSE:COF) insider Kleber Santos sold 2,263 shares of the firm’s stock in a transaction on Thursday, March 19th. The shares were sold at an average price of $43.08, for a total transaction of $97,490.04. Following the completion of the sale, the insider now owns 22,304 shares in the company, valued at $960,856.32. The sale was disclosed in a document filed with the SEC, which is available at this link.

Capital One Financial (NYSE:COF) last issued its earnings results on Tuesday, January 21st. The financial services provider reported $2.49 earnings per share for the quarter, beating the Thomson Reuters’ consensus estimate of $2.35 by $0.14. The business had revenue of $7.40 billion for the quarter, compared to the consensus estimate of $7.32 billion. Capital One Financial had a net margin of 16.40% and a return on equity of 10.67%. The business’s quarterly revenue was up 5.5% compared to the same quarter last year. During the same quarter in the previous year, the firm earned $1.87 earnings per share. On average, research analysts forecast that Capital One Financial Corp. will post 11.37 EPS for the current year. 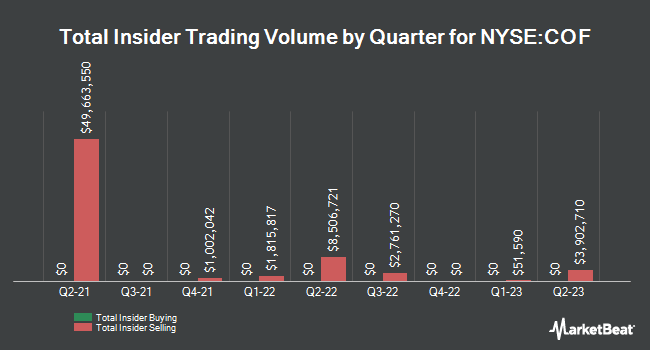