Complete the form below to receive the latest headlines and analysts' recommendations for Vascular Biogenics with our free daily email newsletter:

Vascular Biogenics (NASDAQ:VBLT)‘s stock had its “buy” rating restated by analysts at Chardan Capital in a report issued on Thursday, AnalystRatings.com reports. They presently have a $3.25 price objective on the biopharmaceutical company’s stock. Chardan Capital’s target price points to a potential upside of 132.14% from the stock’s current price.

Vascular Biogenics (NASDAQ:VBLT) last announced its quarterly earnings data on Thursday, March 19th. The biopharmaceutical company reported ($0.16) earnings per share for the quarter, missing analysts’ consensus estimates of ($0.13) by ($0.03). The company had revenue of $0.13 million for the quarter, compared to analysts’ expectations of $0.18 million. Vascular Biogenics had a negative net margin of 3,462.10% and a negative return on equity of 45.23%. As a group, research analysts predict that Vascular Biogenics will post -0.63 EPS for the current fiscal year.

Vascular Biogenics Ltd., a clinical-stage biopharmaceutical company, focuses on the discovery, development, and commercialization of treatments for cancer. The company's program is based on its proprietary vascular targeting system platform technology, which utilizes genetically targeted therapy to destroy newly formed or angiogenic blood vessels.

Further Reading: What is the Quick Ratio? 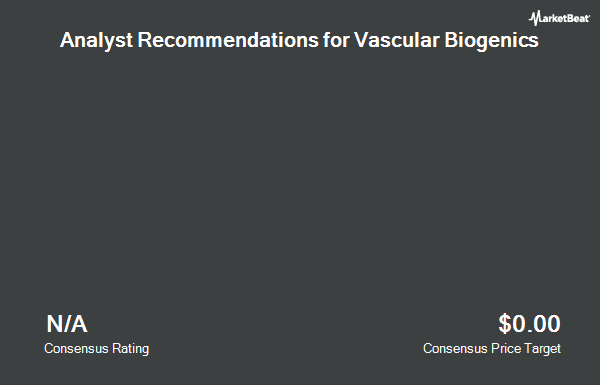