Complete the form below to receive the latest headlines and analysts' recommendations for Royal Gold with our free daily email newsletter:

Shares of Royal Gold, Inc (NASDAQ:RGLD) (TSE:RGL) have received a consensus recommendation of “Hold” from the fifteen analysts that are currently covering the firm, MarketBeat Ratings reports. One investment analyst has rated the stock with a sell rating, eight have assigned a hold rating and five have issued a buy rating on the company. The average twelve-month price objective among brokers that have covered the stock in the last year is $127.25.

Royal Gold (NASDAQ:RGLD) (TSE:RGL) last posted its quarterly earnings data on Wednesday, May 6th. The basic materials company reported $0.68 earnings per share for the quarter, beating the Thomson Reuters’ consensus estimate of $0.67 by $0.01. Royal Gold had a return on equity of 6.93% and a net margin of 35.75%. The business had revenue of $136.40 million for the quarter, compared to analysts’ expectations of $133.59 million. During the same period in the previous year, the firm posted $0.44 EPS. The business’s revenue was up 24.2% on a year-over-year basis. On average, sell-side analysts expect that Royal Gold will post 2.41 earnings per share for the current fiscal year.

Royal Gold, Inc, together with its subsidiaries, acquires and manages precious metal streams, royalties, and related interests. It focuses on acquiring stream and royalty interests or to finance projects that are in production or in development stage in exchange for stream or royalty interests, which primarily consists of gold, silver, copper, nickel, zinc, lead, cobalt, and molybdenum. 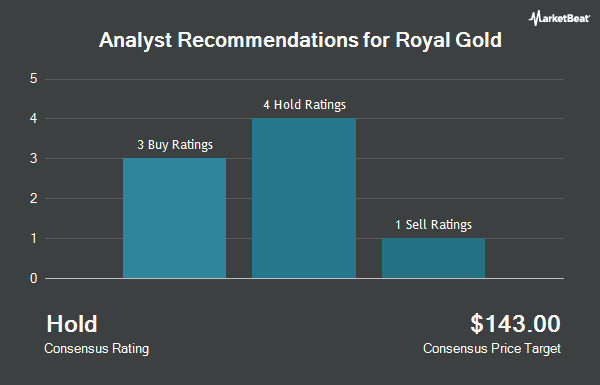