Complete the form below to receive the latest headlines and analysts' recommendations for Werner Enterprises with our free daily email newsletter:

Werner Enterprises, Inc. (NASDAQ:WERN) declared a quarterly dividend on Thursday, May 14th, Zacks reports. Investors of record on Monday, July 6th will be paid a dividend of 0.09 per share by the transportation company on Tuesday, July 21st. This represents a $0.36 annualized dividend and a yield of 0.84%. The ex-dividend date is Thursday, July 2nd.

Werner Enterprises (NASDAQ:WERN) last announced its quarterly earnings results on Tuesday, April 28th. The transportation company reported $0.40 earnings per share (EPS) for the quarter, topping the consensus estimate of $0.35 by $0.05. The business had revenue of $592.70 million for the quarter, compared to analyst estimates of $574.07 million. Werner Enterprises had a return on equity of 14.67% and a net margin of 6.26%. The company’s quarterly revenue was down .6% on a year-over-year basis. During the same quarter in the prior year, the company earned $0.52 earnings per share. Analysts expect that Werner Enterprises will post 1.93 EPS for the current fiscal year.

Werner Enterprises, Inc, a transportation and logistics company, engages in transporting truckload shipments of general commodities in interstate and intrastate commerce in the United States, Mexico, Canada, and China. It operates in two segments, Truckload Transportation Services and Werner Logistics. 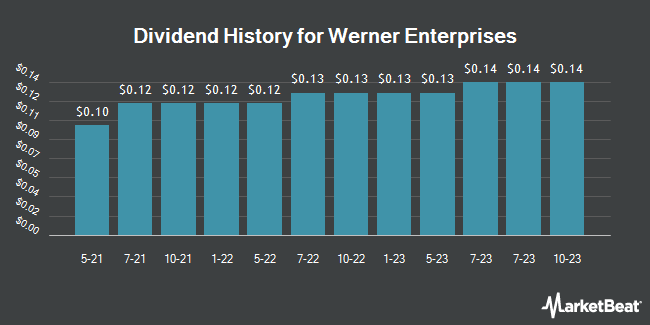 Siemens Given a €115.00 Price Target at Royal Bank of Canada