Complete the form below to receive the latest headlines and analysts' recommendations for Agios Pharmaceuticals with our free daily email newsletter:

BidaskClub upgraded shares of Agios Pharmaceuticals (NASDAQ:AGIO) from a hold rating to a buy rating in a research report released on Tuesday, BidAskClub reports.

Agios Pharmaceuticals (NASDAQ:AGIO) last announced its earnings results on Thursday, April 30th. The biopharmaceutical company reported ($0.59) earnings per share for the quarter, beating the consensus estimate of ($1.67) by $1.08. The company had revenue of $87.10 million during the quarter, compared to the consensus estimate of $31.12 million. Agios Pharmaceuticals had a negative return on equity of 63.85% and a negative net margin of 205.20%. The company’s revenue was up 188.4% on a year-over-year basis. During the same period last year, the firm earned ($1.59) earnings per share. Equities analysts anticipate that Agios Pharmaceuticals will post -4.67 EPS for the current year.

In other Agios Pharmaceuticals news, insider Christopher Bowden sold 3,583 shares of Agios Pharmaceuticals stock in a transaction that occurred on Wednesday, May 20th. The stock was sold at an average price of $50.01, for a total value of $179,185.83. The sale was disclosed in a filing with the Securities & Exchange Commission, which can be accessed through this hyperlink. Insiders own 3.16% of the company’s stock.

Agios Pharmaceuticals, Inc is a biopharmaceutical company, which engages in the discovery and development of novel investigational medicines to treat cancer and rare genetic diseases. It focuses on diseases that are directly caused by changes in genes or chromosomes, often passed from one generation to the next.

Featured Story: What is the Russell 2000 Index? 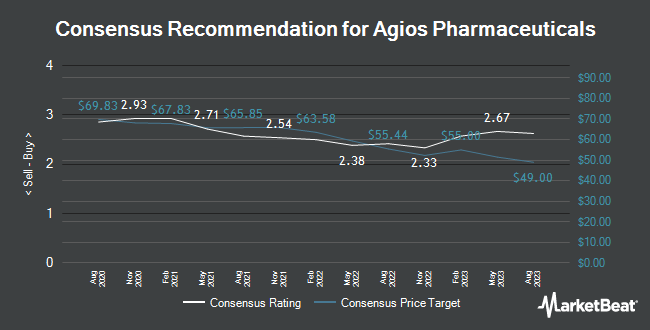