Complete the form below to receive the latest headlines and analysts' recommendations for SeaSpine with our free daily email newsletter:

BidaskClub downgraded shares of SeaSpine (NASDAQ:SPNE) from a hold rating to a sell rating in a research report report published on Tuesday morning, BidAskClub reports.

SeaSpine (NASDAQ:SPNE) last released its earnings results on Wednesday, May 6th. The medical equipment provider reported ($0.43) earnings per share for the quarter, missing the Zacks’ consensus estimate of ($0.37) by ($0.06). The firm had revenue of $36.11 million for the quarter, compared to analyst estimates of $35.89 million. SeaSpine had a negative return on equity of 27.09% and a negative net margin of 26.93%. As a group, sell-side analysts expect that SeaSpine will post -1.92 earnings per share for the current year.

SeaSpine Holdings Corporation, a medical technology company, focuses on the design, development, and commercialization of surgical solutions for the treatment of spinal disorders in the United States and internationally. The company provides orthobiologics and spinal implant solutions for the neurosurgeons and orthopedic spine surgeons to perform fusion procedures in the lumbar, thoracic, and cervical spine. 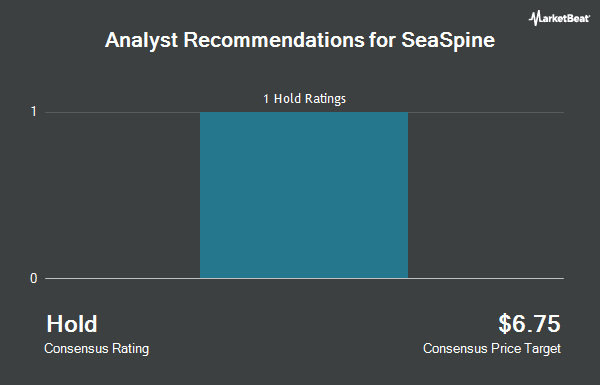 Receive News & Ratings for SeaSpine Daily - Enter your email address below to receive a concise daily summary of the latest news and analysts' ratings for SeaSpine and related companies with MarketBeat.com's FREE daily email newsletter.