Complete the form below to receive the latest headlines and analysts' recommendations for Walmart with our free daily email newsletter:

Walmart Inc (NYSE:WMT) has been given a consensus rating of “Buy” by the thirty-seven brokerages that are currently covering the stock, Marketbeat.com reports. Two investment analysts have rated the stock with a sell rating, ten have given a hold rating and twenty-four have assigned a buy rating to the company. The average 12 month price target among brokers that have updated their coverage on the stock in the last year is $132.48.

Walmart (NYSE:WMT) last released its earnings results on Tuesday, May 19th. The retailer reported $1.18 earnings per share for the quarter, topping the Thomson Reuters’ consensus estimate of $1.12 by $0.06. Walmart had a net margin of 2.81% and a return on equity of 18.33%. The company had revenue of $134.62 billion during the quarter, compared to the consensus estimate of $130.91 billion. During the same quarter in the previous year, the firm earned $1.13 EPS. The company’s revenue was up 9.5% on a year-over-year basis. On average, equities research analysts forecast that Walmart will post 4.93 earnings per share for the current fiscal year.

A number of large investors have recently bought and sold shares of the stock. Joseph P. Lucia & Associates LLC boosted its holdings in shares of Walmart by 75.6% during the first quarter. Joseph P. Lucia & Associates LLC now owns 230 shares of the retailer’s stock worth $26,000 after purchasing an additional 99 shares during the period. Bainco International Investors purchased a new stake in shares of Walmart during the first quarter worth $35,000. RMR Wealth Builders acquired a new stake in Walmart during the fourth quarter valued at $42,000. Contravisory Investment Management Inc. purchased a new position in Walmart in the first quarter valued at about $42,000. Finally, FSA Wealth Management LLC purchased a new position in Walmart in the fourth quarter valued at about $53,000. 29.95% of the stock is currently owned by hedge funds and other institutional investors. 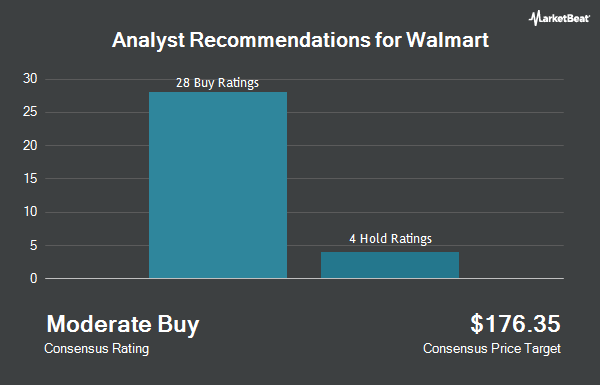 Receive News & Ratings for Walmart Daily - Enter your email address below to receive a concise daily summary of the latest news and analysts' ratings for Walmart and related companies with MarketBeat.com's FREE daily email newsletter.