Complete the form below to receive the latest headlines and analysts' recommendations for D. R. Horton with our free daily email newsletter:

D. R. Horton (NYSE:DHI) last released its earnings results on Tuesday, July 28th. The construction company reported $1.72 EPS for the quarter, topping the consensus estimate of $1.30 by $0.42. D. R. Horton had a net margin of 10.82% and a return on equity of 18.90%. The firm had revenue of $5.39 billion for the quarter, compared to the consensus estimate of $4.99 billion. During the same quarter in the previous year, the firm earned $1.26 earnings per share. The company’s quarterly revenue was up 9.9% compared to the same quarter last year. Research analysts expect that D. R. Horton will post 4.75 earnings per share for the current fiscal year.

In other D. R. Horton news, Director Michael W. Hewatt sold 1,000 shares of D. R. Horton stock in a transaction dated Thursday, June 25th. The stock was sold at an average price of $53.45, for a total value of $53,450.00. Following the completion of the transaction, the director now directly owns 1,000 shares of the company’s stock, valued at approximately $53,450. The transaction was disclosed in a filing with the SEC, which is accessible through this hyperlink. Insiders own 6.96% of the company’s stock.

D.R. Horton, Inc operates as a homebuilding company in East, Midwest, Southeast, South Central, Southwest, and West regions in the United States. It engages in the acquisition and development of land; and construction and sale of homes in 27 states and 81 markets in the United States under the names of D.R. 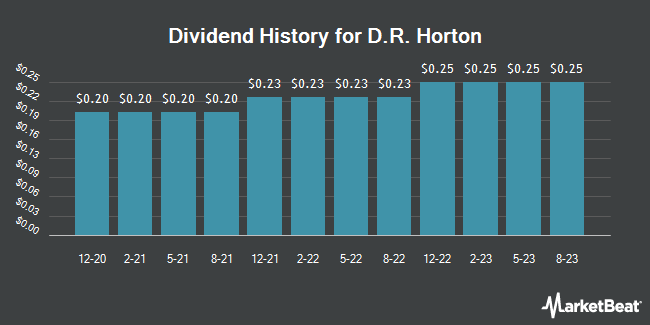