NorthWestern (NYSE:NWE) last issued its quarterly earnings data on Tuesday, July 28th. The utilities provider reported $0.43 EPS for the quarter, missing analysts’ consensus estimates of $0.50 by ($0.07). NorthWestern had a return on equity of 7.91% and a net margin of 12.74%. The firm had revenue of $269.36 million during the quarter, compared to analyst estimates of $252.41 million. During the same quarter in the prior year, the firm earned $0.50 EPS. The business’s quarterly revenue was down .5% compared to the same quarter last year. Sell-side analysts anticipate that NorthWestern will post 3.35 earnings per share for the current fiscal year.

In other NorthWestern news, CEO Robert C. Rowe sold 1,000 shares of the business’s stock in a transaction that occurred on Wednesday, May 6th. The shares were sold at an average price of $55.45, for a total transaction of $55,450.00. The transaction was disclosed in a filing with the SEC, which is available at this link. 1.17% of the stock is owned by company insiders.

Featured Story: When can a hold rating present a buying opportunity? 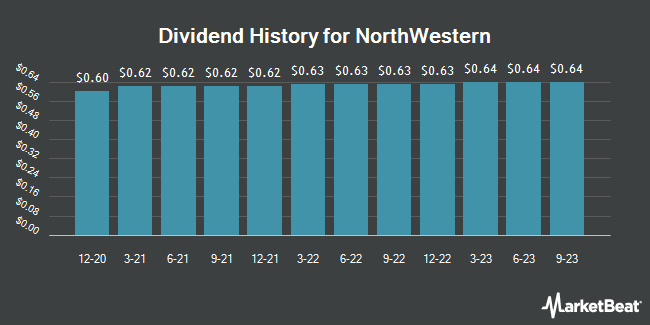