RIO has been the topic of a number of recent analyst reports. Goldman Sachs Group set a GBX 4,410 ($54.27) price target on shares of Rio Tinto and gave the stock a “neutral” rating in a research note on Wednesday. UBS Group reissued a “neutral” rating and issued a GBX 4,400 ($54.15) target price on shares of Rio Tinto in a research note on Monday. Jefferies Financial Group boosted their price objective on shares of Rio Tinto from GBX 5,200 ($63.99) to GBX 5,400 ($66.45) and gave the company a “buy” rating in a report on Monday, July 6th. Bank of America raised Rio Tinto to a “buy” rating and set a GBX 5,700 ($70.15) price objective on the stock in a research note on Friday, May 29th. Finally, Morgan Stanley reiterated an “equal weight” rating on shares of Rio Tinto in a report on Monday, July 13th. Three investment analysts have rated the stock with a sell rating, seven have issued a hold rating and six have issued a buy rating to the company. The company has an average rating of “Hold” and an average target price of GBX 4,538 ($55.85).

See Also: What is an inverted yield curve? 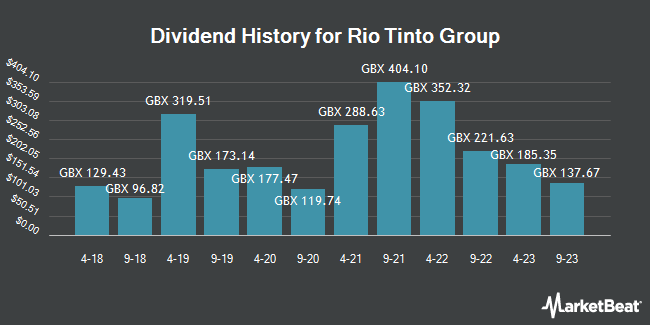 Bayer Given a €82.00 Price Target by Deutsche Bank Analysts