Complete the form below to receive the latest headlines and analysts' recommendations for Blackrock Capital Investment with our free daily email newsletter:

Blackrock Capital Investment Corp (NASDAQ:BKCC) declared a quarterly dividend on Wednesday, July 29th, Zacks reports. Investors of record on Tuesday, August 18th will be paid a dividend of 0.10 per share by the asset manager on Tuesday, September 29th. This represents a $0.40 dividend on an annualized basis and a yield of 16.39%. The ex-dividend date of this dividend is Monday, August 17th.

A number of research firms have recently weighed in on BKCC. Zacks Investment Research raised Blackrock Capital Investment from a “sell” rating to a “hold” rating in a report on Wednesday, July 8th. ValuEngine upgraded shares of Blackrock Capital Investment from a “strong sell” rating to a “sell” rating in a research note on Friday, May 1st. Two analysts have rated the stock with a sell rating, one has issued a hold rating and one has given a buy rating to the company. The stock currently has an average rating of “Hold” and an average target price of $4.25.

See Also: What is a trade deficit? 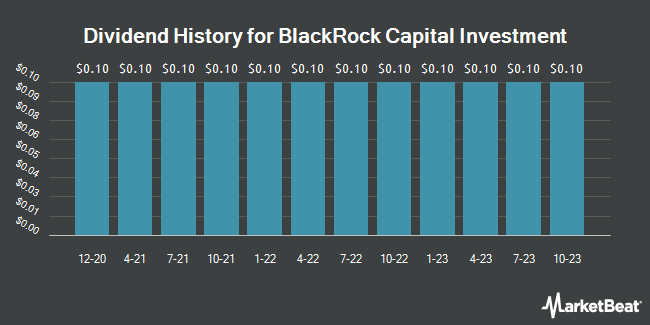