Cognex Co. (NASDAQ:CGNX) announced a quarterly dividend on Wednesday, July 29th, Zacks reports. Investors of record on Friday, August 14th will be paid a dividend of 0.055 per share by the scientific and technical instruments company on Friday, August 28th. This represents a $0.22 annualized dividend and a dividend yield of 0.34%. The ex-dividend date is Thursday, August 13th.

Cognex (NASDAQ:CGNX) last announced its quarterly earnings results on Wednesday, July 29th. The scientific and technical instruments company reported ($0.01) earnings per share for the quarter, missing the Thomson Reuters’ consensus estimate of $0.10 by ($0.11). The firm had revenue of $169.10 million for the quarter, compared to the consensus estimate of $149.90 million. Cognex had a net margin of 20.50% and a return on equity of 10.81%. Cognex’s revenue was down 15.0% on a year-over-year basis. During the same period last year, the business earned $0.27 EPS. On average, equities analysts expect that Cognex will post 0.58 earnings per share for the current year.

Featured Story: Understanding each part of a balance sheet 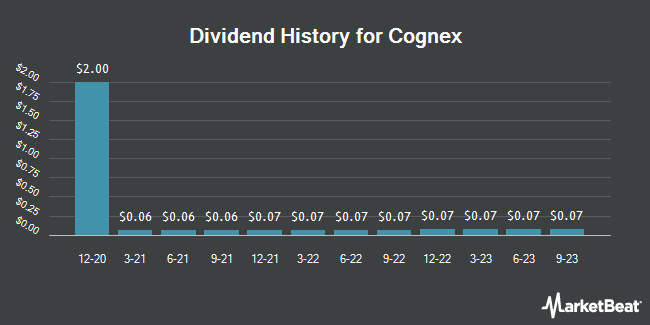