Complete the form below to receive the latest headlines and analysts' recommendations for Hanmi Financial with our free daily email newsletter:

Hanmi Financial Corp (NASDAQ:HAFC) declared a quarterly dividend on Thursday, July 30th, Wall Street Journal reports. Investors of record on Monday, August 10th will be given a dividend of 0.08 per share by the bank on Monday, August 31st. This represents a $0.32 annualized dividend and a dividend yield of 3.47%. The ex-dividend date of this dividend is Friday, August 7th.

Hanmi Financial (NASDAQ:HAFC) last released its quarterly earnings data on Thursday, April 30th. The bank reported $0.08 EPS for the quarter, missing the Zacks’ consensus estimate of $0.30 by ($0.22). Hanmi Financial had a return on equity of 4.82% and a net margin of 9.70%. The company had revenue of $50.20 million for the quarter, compared to the consensus estimate of $49.26 million. Research analysts anticipate that Hanmi Financial will post 0.82 EPS for the current fiscal year.

HAFC has been the subject of a number of research analyst reports. BidaskClub cut shares of Hanmi Financial from a “hold” rating to a “sell” rating in a research report on Tuesday, June 16th. Zacks Investment Research raised shares of Hanmi Financial from a “strong sell” rating to a “hold” rating in a research report on Wednesday, July 8th. One investment analyst has rated the stock with a sell rating and three have given a hold rating to the stock. The stock presently has an average rating of “Hold” and a consensus target price of $21.50.

See Also: What is a trade deficit? 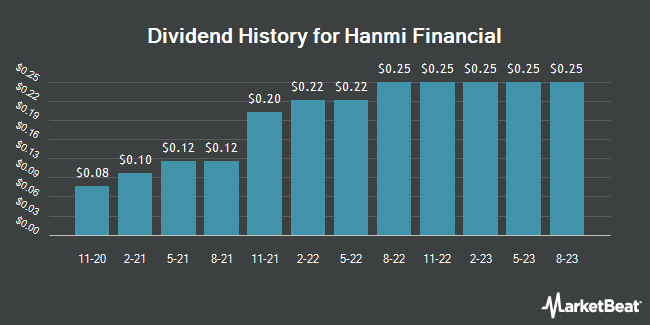