Complete the form below to receive the latest headlines and analysts' recommendations for Jeld-Wen with our free daily email newsletter:

Chartwell Investment Partners LLC boosted its stake in Jeld-Wen Holding Inc (NYSE:JELD) by 3.8% in the second quarter, according to its most recent Form 13F filing with the Securities & Exchange Commission. The firm owned 268,036 shares of the company’s stock after purchasing an additional 9,791 shares during the period. Chartwell Investment Partners LLC owned about 0.27% of Jeld-Wen worth $4,318,000 at the end of the most recent reporting period.

A number of brokerages have recently issued reports on JELD. ValuEngine raised Jeld-Wen from a “sell” rating to a “hold” rating in a research note on Tuesday, April 21st. Wells Fargo & Co increased their price target on Jeld-Wen from $13.50 to $20.00 and gave the stock an “equal weight” rating in a report on Wednesday, July 22nd. B. Riley reduced their price objective on shares of Jeld-Wen from $14.00 to $11.00 and set a “neutral” rating for the company in a research report on Tuesday, April 28th. Robert W. Baird boosted their target price on shares of Jeld-Wen from $9.00 to $11.00 and gave the company a “neutral” rating in a research report on Wednesday, May 6th. Finally, JPMorgan Chase & Co. raised their price target on shares of Jeld-Wen from $12.00 to $18.00 in a report on Friday, July 10th. Two analysts have rated the stock with a sell rating, ten have given a hold rating and two have given a buy rating to the company. The company has an average rating of “Hold” and a consensus target price of $16.42.

Jeld-Wen (NYSE:JELD) last issued its quarterly earnings data on Tuesday, May 5th. The company reported $0.13 EPS for the quarter, topping the consensus estimate of $0.10 by $0.03. The firm had revenue of $979.20 million during the quarter, compared to the consensus estimate of $979.09 million. Jeld-Wen had a return on equity of 13.86% and a net margin of 1.10%. The company’s quarterly revenue was down 3.1% compared to the same quarter last year. During the same period in the prior year, the business posted $0.23 earnings per share. On average, sell-side analysts predict that Jeld-Wen Holding Inc will post 0.71 EPS for the current year.

In other news, CEO Gary S. Michel acquired 10,000 shares of the business’s stock in a transaction on Thursday, May 7th. The shares were purchased at an average cost of $12.68 per share, with a total value of $126,800.00. Following the acquisition, the chief executive officer now directly owns 202,132 shares of the company’s stock, valued at $2,563,033.76. The transaction was disclosed in a document filed with the SEC, which is available through this link. 1.19% of the stock is currently owned by company insiders. 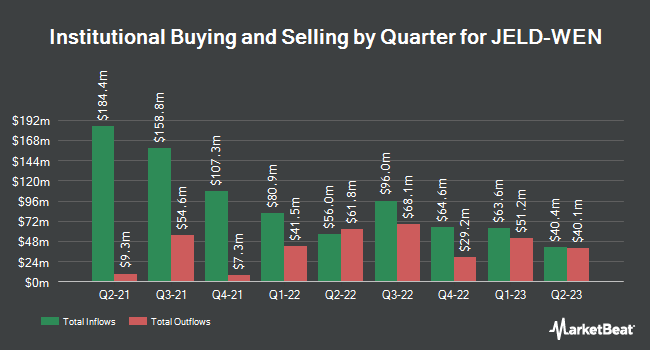 Receive News & Ratings for Jeld-Wen Daily - Enter your email address below to receive a concise daily summary of the latest news and analysts' ratings for Jeld-Wen and related companies with MarketBeat.com's FREE daily email newsletter.