Complete the form below to receive the latest headlines and analysts' recommendations for bluebird bio with our free daily email newsletter:

Peregrine Capital Management LLC lessened its stake in bluebird bio Inc (NASDAQ:BLUE) by 34.8% during the 2nd quarter, according to its most recent filing with the Securities and Exchange Commission (SEC). The firm owned 86,509 shares of the biotechnology company’s stock after selling 46,245 shares during the period. Peregrine Capital Management LLC owned 0.16% of bluebird bio worth $5,281,000 as of its most recent SEC filing.

bluebird bio (NASDAQ:BLUE) last released its earnings results on Monday, May 11th. The biotechnology company reported ($3.64) EPS for the quarter, topping analysts’ consensus estimates of ($4.05) by $0.41. The company had revenue of $21.90 million during the quarter, compared to analysts’ expectations of $8.00 million. bluebird bio had a negative net margin of 1,531.04% and a negative return on equity of 60.05%. bluebird bio’s revenue for the quarter was up 75.2% on a year-over-year basis. During the same period last year, the business earned ($2.99) EPS. On average, equities research analysts expect that bluebird bio Inc will post -12.12 earnings per share for the current year.

bluebird bio, Inc, a clinical-stage biotechnology company, focuses on developing transformative gene therapies for severe genetic diseases and cancer. Its product candidates in severe genetic diseases include LentiGlobin, which is in various clinical studies for the treatment of transfusion-dependent ß-thalassemia and severe sickle cell disease; and Lenti-D that is in Phase II/III clinical trials for the treatment of cerebral adrenoleukodystrophy, a rare hereditary neurological disorder. 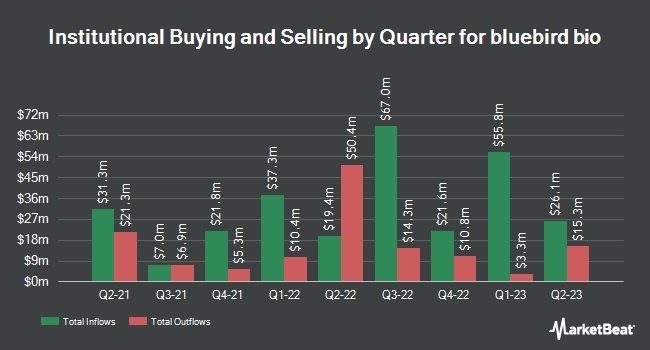 Walmart Inc to Issue Quarterly Dividend of $0.54 on September 8th