Complete the form below to receive the latest headlines and analysts' recommendations for Sirius XM with our free daily email newsletter:

Pivotal Research restated their buy rating on shares of Sirius XM (NASDAQ:SIRI) in a research note released on Thursday morning, TipRanks reports. Pivotal Research currently has a $7.50 price objective on the stock.

Sirius XM (NASDAQ:SIRI) last released its earnings results on Thursday, July 30th. The company reported $0.05 EPS for the quarter, hitting the Zacks’ consensus estimate of $0.05. Sirius XM had a negative return on equity of 141.29% and a net margin of 12.98%. The firm had revenue of $1.87 billion during the quarter, compared to the consensus estimate of $1.88 billion. During the same quarter in the previous year, the company posted $0.06 earnings per share. The company’s revenue was down 5.2% compared to the same quarter last year. As a group, sell-side analysts predict that Sirius XM will post 0.23 earnings per share for the current year.

The business also recently announced a quarterly dividend, which will be paid on Monday, August 31st. Shareholders of record on Friday, August 7th will be issued a $0.0133 dividend. This represents a $0.05 annualized dividend and a yield of 0.91%. The ex-dividend date of this dividend is Thursday, August 6th. Sirius XM’s payout ratio is currently 25.00%.

In other news, Director Gregory B. Maffei sold 84,750 shares of the business’s stock in a transaction dated Tuesday, May 12th. The shares were sold at an average price of $5.60, for a total transaction of $474,600.00. Following the transaction, the director now owns 515,610 shares of the company’s stock, valued at approximately $2,887,416. The sale was disclosed in a filing with the SEC, which is available at this hyperlink. 0.93% of the stock is owned by insiders. 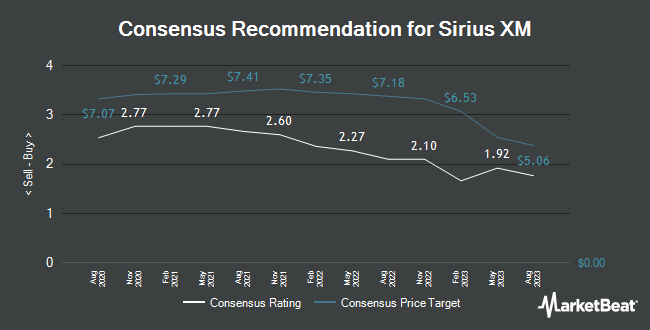