Complete the form below to receive the latest headlines and analysts' recommendations for Falcon Minerals with our free daily email newsletter:

Equities research analysts expect Falcon Minerals Corp (NASDAQ:FLMN) to post sales of $6.20 million for the current fiscal quarter, according to Zacks Investment Research. Four analysts have made estimates for Falcon Minerals’ earnings, with the highest sales estimate coming in at $7.00 million and the lowest estimate coming in at $5.80 million. Falcon Minerals posted sales of $18.25 million in the same quarter last year, which would indicate a negative year over year growth rate of 66%. The company is scheduled to announce its next earnings results after the market closes on Wednesday, August 5th.

Falcon Minerals (NASDAQ:FLMN) last issued its earnings results on Thursday, May 7th. The company reported $0.05 EPS for the quarter, missing the consensus estimate of $0.06 by ($0.01). Falcon Minerals had a return on equity of 4.50% and a net margin of 18.38%. The company had revenue of $13.60 million during the quarter, compared to the consensus estimate of $14.23 million.

In other Falcon Minerals news, Director Brian L. Frank acquired 40,000 shares of the business’s stock in a transaction dated Monday, May 18th. The stock was bought at an average price of $2.41 per share, with a total value of $96,400.00. Following the purchase, the director now owns 277,212 shares of the company’s stock, valued at $668,080.92. The transaction was disclosed in a legal filing with the Securities & Exchange Commission, which is available at this hyperlink. 15.80% of the stock is currently owned by corporate insiders.

Falcon Minerals Corporation acquires and owns mineral, royalty, and over-riding royalty interests in oil and natural gas properties in North America. It owns interests covering approximately 256,000 gross unit acres in the Eagle Ford Shale and Austin Chalk in Karnes, DeWitt, and Gonzales Counties in Texas, as well as approximately 68,000 gross unit acres in Pennsylvania, Ohio, and West Virginia that is prospective for the Marcellus Shale. 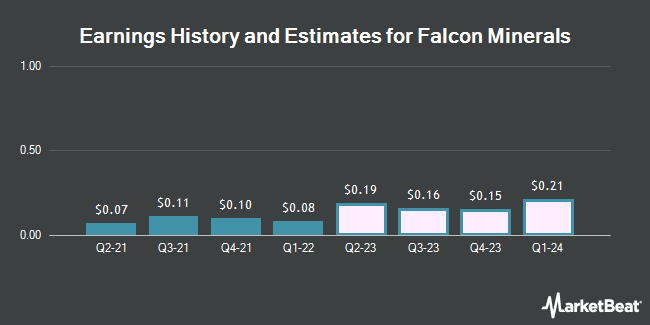