Complete the form below to receive the latest headlines and analysts' recommendations for Dicerna Pharmaceuticals with our free daily email newsletter:

Dicerna Pharmaceuticals (NASDAQ:DRNA) was upgraded by analysts at BidaskClub from a “strong sell” rating to a “sell” rating in a report issued on Saturday, BidAskClub reports.

In other Dicerna Pharmaceuticals news, COO James B. Weissman sold 4,360 shares of the firm’s stock in a transaction dated Monday, August 3rd. The stock was sold at an average price of $22.47, for a total transaction of $97,969.20. Following the transaction, the chief operating officer now owns 25,961 shares in the company, valued at $583,343.67. The sale was disclosed in a document filed with the SEC, which is available through this link. Also, CEO Douglas Fambrough bought 10,000 shares of Dicerna Pharmaceuticals stock in a transaction on Tuesday, September 1st. The shares were bought at an average price of $18.06 per share, for a total transaction of $180,600.00. Following the acquisition, the chief executive officer now owns 22,300 shares of the company’s stock, valued at approximately $402,738. The disclosure for this purchase can be found here. In the last 90 days, insiders have sold 25,090 shares of company stock worth $614,541. Company insiders own 11.30% of the company’s stock. 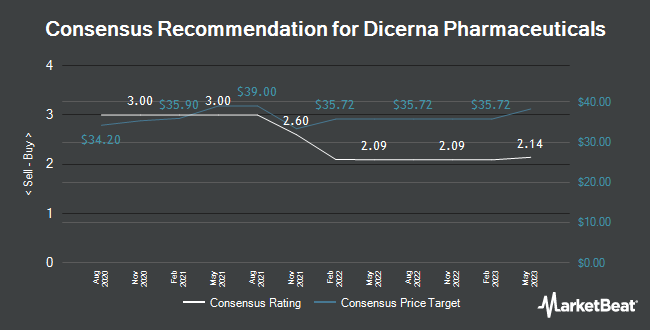