ON Semiconductor Co. (NASDAQ:ON) VP Paul E. Rolls sold 42,708 shares of the firm’s stock in a transaction on Thursday, October 8th. The stock was sold at an average price of $25.80, for a total value of $1,101,866.40. The transaction was disclosed in a filing with the SEC, which is accessible through this hyperlink.

ON Semiconductor (NASDAQ:ON) last announced its earnings results on Saturday, August 8th. The semiconductor company reported $0.12 EPS for the quarter, topping the Thomson Reuters’ consensus estimate of $0.02 by $0.10. The firm had revenue of $1.21 billion for the quarter, compared to the consensus estimate of $1.18 billion. ON Semiconductor had a positive return on equity of 10.85% and a negative net margin of 0.37%. The business’s quarterly revenue was down 10.0% compared to the same quarter last year. During the same period in the previous year, the business earned $0.42 EPS. On average, research analysts anticipate that ON Semiconductor Co. will post 0.68 earnings per share for the current fiscal year.

See Also: Why is cost of goods sold important? 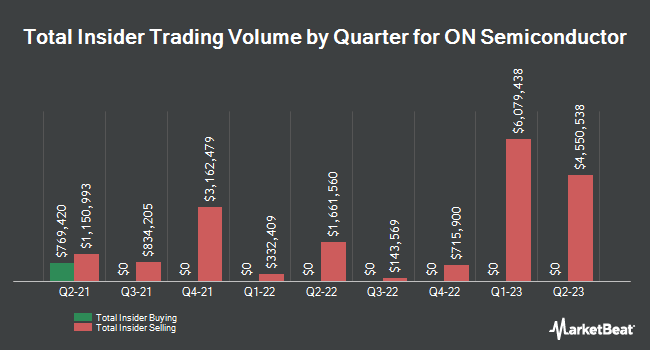