Complete the form below to receive the latest headlines and analysts' recommendations for II-VI with our free daily email newsletter:

Bank of America assumed coverage on shares of II-VI (NASDAQ:IIVI) in a report issued on Thursday, The Fly reports. The brokerage issued a buy rating and a $60.00 target price on the scientific and technical instruments company’s stock.

II-VI (NASDAQ:IIVI) last issued its quarterly earnings results on Thursday, August 13th. The scientific and technical instruments company reported $1.18 earnings per share (EPS) for the quarter, beating analysts’ consensus estimates of $0.77 by $0.41. The firm had revenue of $746.29 million during the quarter, compared to analyst estimates of $719.58 million. II-VI had a negative return on equity of 3.23% and a negative net margin of 2.82%. On average, research analysts predict that II-VI will post 1.79 earnings per share for the current fiscal year.

In related news, Director Francis J. Kramer sold 14,500 shares of the stock in a transaction on Wednesday, August 5th. The stock was sold at an average price of $52.53, for a total transaction of $761,685.00. Following the completion of the sale, the director now directly owns 253,049 shares in the company, valued at $13,292,663.97. The sale was disclosed in a filing with the SEC, which is available through this hyperlink. Company insiders own 2.80% of the company’s stock. 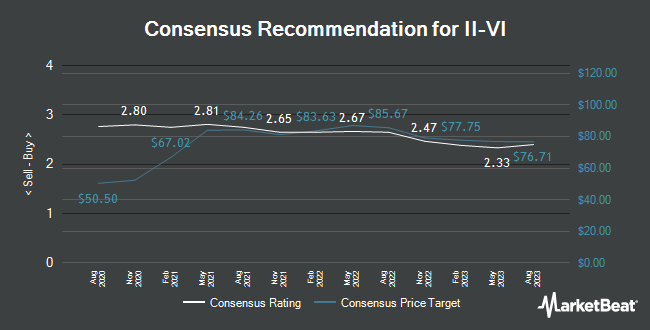 Receive News & Ratings for II-VI Daily - Enter your email address below to receive a concise daily summary of the latest news and analysts' ratings for II-VI and related companies with MarketBeat.com's FREE daily email newsletter.