Complete the form below to receive the latest headlines and analysts' recommendations for Bank of New York Mellon with our free daily email newsletter:

Bank of New York Mellon Corp (NYSE:BK) declared a quarterly dividend on Friday, October 16th, RTT News reports. Investors of record on Wednesday, October 28th will be given a dividend of 0.31 per share by the bank on Tuesday, November 10th. This represents a $1.24 annualized dividend and a yield of 3.26%. The ex-dividend date of this dividend is Tuesday, October 27th.

In related news, EVP Mitchell E. Harris sold 35,000 shares of the stock in a transaction dated Wednesday, July 22nd. The shares were sold at an average price of $35.75, for a total transaction of $1,251,250.00. Following the completion of the transaction, the executive vice president now directly owns 145,425 shares of the company’s stock, valued at $5,198,943.75. The transaction was disclosed in a filing with the Securities & Exchange Commission, which is available at the SEC website. Corporate insiders own 0.12% of the company’s stock.

About Bank of New York Mellon 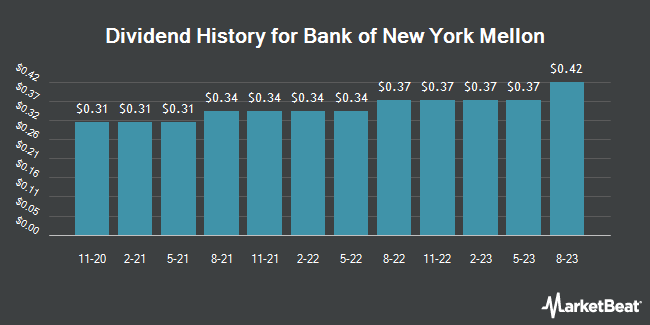