Complete the form below to receive the latest headlines and analysts' recommendations for Quest Diagnostics with our free daily email newsletter:

Quest Diagnostics Incorporated (NYSE:DGX) declared a quarterly dividend on Wednesday, November 18th, RTT News reports. Shareholders of record on Wednesday, January 20th will be given a dividend of 0.56 per share by the medical research company on Wednesday, February 3rd. This represents a $2.24 annualized dividend and a yield of 1.82%.

Quest Diagnostics (NYSE:DGX) last released its earnings results on Thursday, October 22nd. The medical research company reported $4.31 EPS for the quarter, beating the Thomson Reuters’ consensus estimate of $3.75 by $0.56. The firm had revenue of $2.79 billion for the quarter, compared to analysts’ expectations of $2.71 billion. Quest Diagnostics had a net margin of 13.22% and a return on equity of 19.23%. Quest Diagnostics’s quarterly revenue was up 42.6% on a year-over-year basis. During the same quarter last year, the company earned $1.76 EPS. Research analysts expect that Quest Diagnostics will post 9.99 earnings per share for the current fiscal year.

Read More: What is a death cross? 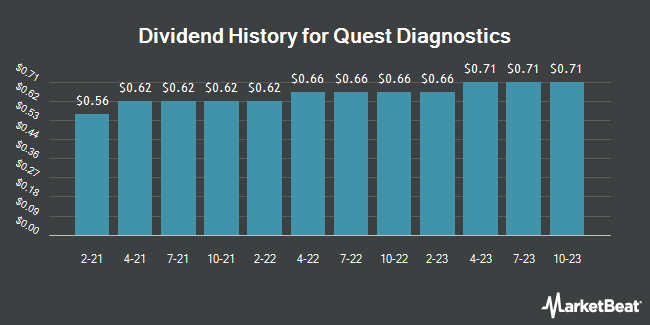 Knorr-Bremse Aktiengesellschaft Given a €105.00 Price Target at Nord/LB

Knorr-Bremse Aktiengesellschaft Given a €112.00 Price Target at Kepler Capital Markets

Integer Upgraded to B by TheStreet