Complete the form below to receive the latest headlines and analysts' recommendations for PayPal with our free daily email newsletter:

Acadian Asset Management LLC increased its holdings in PayPal Holdings, Inc. (NASDAQ:PYPL) by 39.1% in the third quarter, according to its most recent disclosure with the Securities & Exchange Commission. The institutional investor owned 24,231 shares of the credit services provider’s stock after buying an additional 6,805 shares during the period. Acadian Asset Management LLC’s holdings in PayPal were worth $4,774,000 as of its most recent filing with the Securities & Exchange Commission.

PayPal (NASDAQ:PYPL) last released its quarterly earnings results on Monday, November 2nd. The credit services provider reported $1.07 earnings per share for the quarter, topping the consensus estimate of $0.94 by $0.13. PayPal had a net margin of 13.44% and a return on equity of 16.17%. The firm had revenue of $5.46 billion during the quarter, compared to the consensus estimate of $5.41 billion. During the same quarter in the prior year, the firm earned $0.61 EPS. The company’s revenue for the quarter was up 24.7% on a year-over-year basis. As a group, sell-side analysts expect that PayPal Holdings, Inc. will post 2.76 earnings per share for the current year.

PayPal Holdings, Inc operates as a technology platform and digital payments company that enables digital and mobile payments on behalf of consumers and merchants worldwide. Its payment solutions include PayPal, PayPal Credit, Braintree, Venmo, Xoom, and iZettle products. The company's payments platform allows consumers to send and receive payments, withdraw funds to their bank accounts, and hold balances in their PayPal accounts in various currencies.

See Also: How does a reverse stock split work?

Want to see what other hedge funds are holding PYPL? Visit HoldingsChannel.com to get the latest 13F filings and insider trades for PayPal Holdings, Inc. (NASDAQ:PYPL). 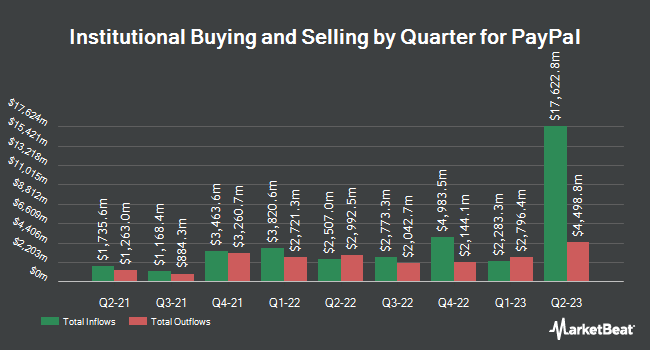 Receive News & Ratings for PayPal Daily - Enter your email address below to receive a concise daily summary of the latest news and analysts' ratings for PayPal and related companies with MarketBeat.com's FREE daily email newsletter.