Complete the form below to receive the latest headlines and analysts' recommendations for Spectrum Pharmaceuticals with our free daily email newsletter:

Spectrum Pharmaceuticals, Inc. (NASDAQ:SPPI) CEO Joseph W. Turgeon sold 162,473 shares of the company’s stock in a transaction that occurred on Wednesday, November 18th. The stock was sold at an average price of $4.13, for a total transaction of $671,013.49. Following the sale, the chief executive officer now owns 528,661 shares in the company, valued at $2,183,369.93. The transaction was disclosed in a filing with the Securities & Exchange Commission, which is accessible through the SEC website.

Spectrum Pharmaceuticals, Inc, a biopharma company, develops and commercializes oncology and hematology drug products. The company is developing ROLONTIS, a novel long-acting granulocyte colony-stimulating for chemotherapy-induced neutropenia; Poziotinib, a novel irreversible tyrosine kinase inhibitor for non-small cell lung cancer tumors with various mutations; and Anti-CD20-IFNÃ¡, an antibody-interferon fusion molecule directed against CD20 that is in Phase I development for the treatment of relapsed or refractory non-Hodgkin's lymphoma patients, including diffuse large B-cell lymphoma. 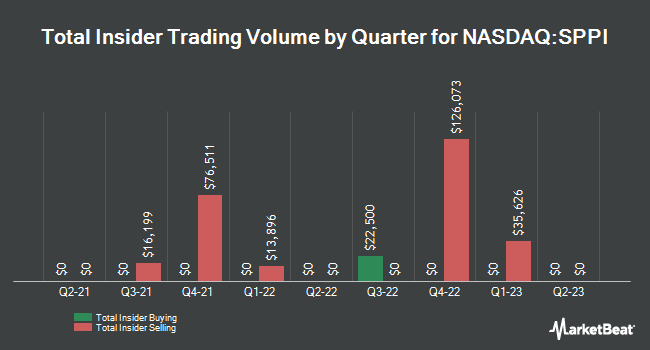