Complete the form below to receive the latest headlines and analysts' recommendations for Okta with our free daily email newsletter:

Equities analysts expect Okta, Inc. (NASDAQ:OKTA) to post sales of $221.61 million for the current quarter, according to Zacks. Seven analysts have issued estimates for Okta’s earnings, with the lowest sales estimate coming in at $221.00 million and the highest estimate coming in at $222.00 million. Okta reported sales of $167.33 million during the same quarter last year, which indicates a positive year-over-year growth rate of 32.4%. The company is expected to issue its next quarterly earnings results on Thursday, March 4th.

According to Zacks, analysts expect that Okta will report full-year sales of $822.18 million for the current year, with estimates ranging from $821.68 million to $822.70 million. For the next fiscal year, analysts forecast that the firm will post sales of $1.07 billion, with estimates ranging from $1.06 billion to $1.08 billion. Zacks’ sales calculations are an average based on a survey of research firms that cover Okta.

Okta (NASDAQ:OKTA) last announced its quarterly earnings data on Tuesday, December 1st. The company reported $0.04 EPS for the quarter, beating the Zacks’ consensus estimate of ($0.01) by $0.05. The firm had revenue of $217.40 million during the quarter, compared to the consensus estimate of $203.15 million. Okta had a negative net margin of 31.38% and a negative return on equity of 31.29%. The firm’s revenue was up 42.1% compared to the same quarter last year. During the same quarter last year, the firm earned ($0.07) earnings per share.

Okta, Inc provides identity management platforms for enterprises, small and medium-sized businesses, universities, non-profits, and government agencies in the United States and internationally. The company offers Okta Identity Cloud, a platform that offers a suite of products to manage and secure identities, such as Universal Directory, a cloud-based system of record to store and secure user, application, and device profiles for an organization; and Single Sign-On that enables users to access their applications in the cloud or on-premise from various devices with a single entry of their user credentials. 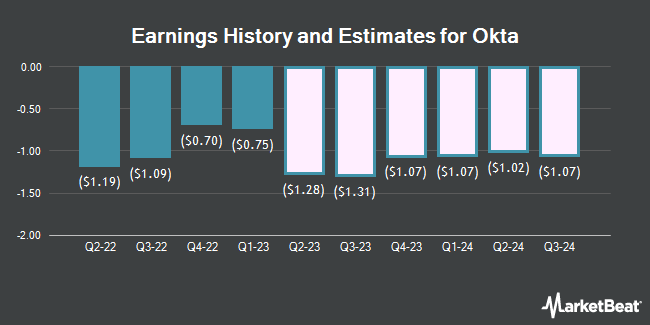 Receive News & Ratings for Okta Daily - Enter your email address below to receive a concise daily summary of the latest news and analysts' ratings for Okta and related companies with MarketBeat.com's FREE daily email newsletter.