Complete the form below to receive the latest headlines and analysts' recommendations for People's United Financial with our free daily email newsletter:

People’s United Financial (NASDAQ:PBCT) posted its earnings results on Wednesday. The bank reported $0.35 EPS for the quarter, beating the consensus estimate of $0.32 by $0.03, MarketWatch Earnings reports. People’s United Financial had a return on equity of 7.30% and a net margin of 21.57%. During the same period in the prior year, the firm earned $0.37 earnings per share.

In related news, EVP Kirk W. Walters sold 25,000 shares of the firm’s stock in a transaction that occurred on Tuesday, January 19th. The stock was sold at an average price of $14.43, for a total transaction of $360,750.00. Following the completion of the sale, the executive vice president now owns 52,525 shares of the company’s stock, valued at $757,935.75. The transaction was disclosed in a legal filing with the Securities & Exchange Commission, which is available at the SEC website. Company insiders own 2.20% of the company’s stock.

See Also: The components of the Stochastic Momentum Index 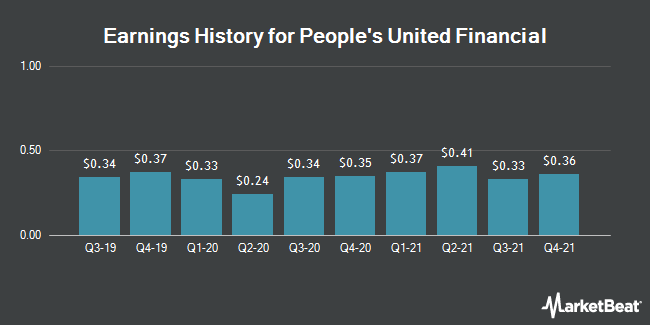