Complete the form below to receive the latest headlines and analysts' recommendations for Belden with our free daily email newsletter:

$495.62 Million in Sales Expected for Belden Inc. (NYSE:BDC) This Quarter

Equities analysts expect that Belden Inc. (NYSE:BDC) will announce sales of $495.62 million for the current fiscal quarter, Zacks reports. Two analysts have issued estimates for Belden’s earnings. The lowest sales estimate is $494.24 million and the highest is $497.00 million. Belden reported sales of $463.53 million in the same quarter last year, which indicates a positive year over year growth rate of 6.9%. The business is scheduled to issue its next earnings report on Wednesday, May 5th.

According to Zacks, analysts expect that Belden will report full year sales of $2.02 billion for the current fiscal year, with estimates ranging from $2.01 billion to $2.04 billion. For the next financial year, analysts expect that the firm will post sales of $2.03 billion, with estimates ranging from $1.97 billion to $2.08 billion. Zacks’ sales averages are a mean average based on a survey of research firms that that provide coverage for Belden.

Belden (NYSE:BDC) last issued its quarterly earnings results on Tuesday, February 9th. The industrial products company reported $0.90 earnings per share for the quarter, topping analysts’ consensus estimates of $0.77 by $0.13. The company had revenue of $498.50 million during the quarter, compared to analyst estimates of $481.81 million. Belden had a negative net margin of 10.95% and a positive return on equity of 15.55%. The business’s revenue for the quarter was down 9.3% compared to the same quarter last year. During the same period in the prior year, the business posted $1.20 EPS.

The company also recently declared a quarterly dividend, which will be paid on Wednesday, April 7th. Stockholders of record on Friday, March 12th will be issued a dividend of $0.05 per share. The ex-dividend date of this dividend is Thursday, March 11th. This represents a $0.20 dividend on an annualized basis and a dividend yield of 0.46%. Belden’s dividend payout ratio is currently 4.42%.

Belden Inc operates as a signal transmission solutions company in the United States and internationally. The company operates in two segments, Enterprise Solutions and Industrial Solutions. The Enterprise Solutions segment offers copper cable and connectivity solutions, fiber cable and connectivity solutions, and racks and enclosures for use in applications, such as local area networks, data centers, access control, and building automation, as well as live production and performance, video display and digital signage, and corporate communications. 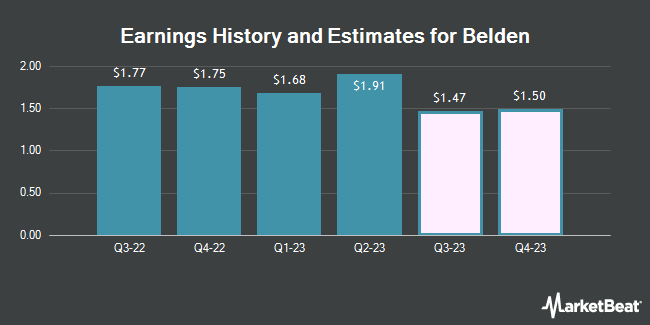 Receive News & Ratings for Belden Daily - Enter your email address below to receive a concise daily summary of the latest news and analysts' ratings for Belden and related companies with MarketBeat.com's FREE daily email newsletter.