Complete the form below to receive the latest headlines and analysts' recommendations for Masonite International with our free daily email newsletter:

Wall Street analysts expect that Masonite International Co. (NYSE:DOOR) will announce sales of $574.56 million for the current fiscal quarter, Zacks Investment Research reports. Three analysts have provided estimates for Masonite International’s earnings, with the lowest sales estimate coming in at $573.27 million and the highest estimate coming in at $576.60 million. Masonite International reported sales of $531.24 million in the same quarter last year, which would suggest a positive year over year growth rate of 8.2%. The company is expected to issue its next quarterly earnings results after the market closes on Wednesday, February 24th.

On average, analysts expect that Masonite International will report full year sales of $2.21 billion for the current fiscal year, with estimates ranging from $2.21 billion to $2.22 billion. For the next year, analysts anticipate that the company will post sales of $2.44 billion, with estimates ranging from $2.40 billion to $2.46 billion. Zacks Investment Research’s sales calculations are a mean average based on a survey of research analysts that cover Masonite International.

In other news, Director Jay Ira Steinfeld acquired 500 shares of the business’s stock in a transaction on Wednesday, November 25th. The stock was bought at an average cost of $100.99 per share, for a total transaction of $50,495.00. Following the purchase, the director now owns 500 shares in the company, valued at $50,495. The purchase was disclosed in a filing with the Securities & Exchange Commission, which is available at this hyperlink. 1.49% of the stock is currently owned by insiders. 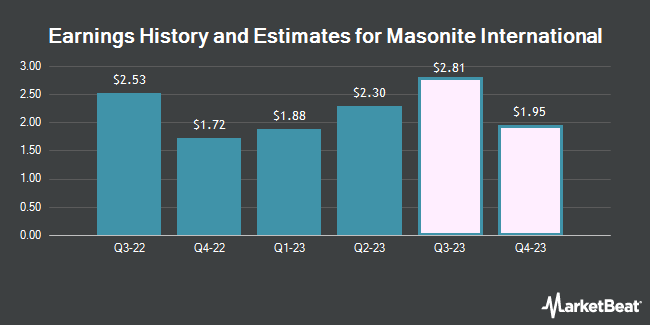