Complete the form below to receive the latest headlines and analysts' recommendations for A. O. Smith with our free daily email newsletter:

Equities research analysts expect that A. O. Smith Co. (NYSE:AOS) will announce $770.18 million in sales for the current fiscal quarter, Zacks reports. Five analysts have made estimates for A. O. Smith’s earnings, with the lowest sales estimate coming in at $747.20 million and the highest estimate coming in at $790.00 million. A. O. Smith reported sales of $636.90 million in the same quarter last year, which indicates a positive year-over-year growth rate of 20.9%. The company is expected to issue its next earnings results on Tuesday, May 4th.

On average, analysts expect that A. O. Smith will report full year sales of $3.18 billion for the current fiscal year, with estimates ranging from $3.14 billion to $3.23 billion. For the next year, analysts forecast that the company will report sales of $3.33 billion, with estimates ranging from $3.30 billion to $3.35 billion. Zacks’ sales averages are a mean average based on a survey of research analysts that follow A. O. Smith.

Several research analysts have commented on AOS shares. DA Davidson reaffirmed a “buy” rating on shares of A. O. Smith in a research report on Tuesday, February 2nd. Rosenblatt Securities boosted their price target on A. O. Smith from $65.00 to $72.00 and gave the stock a “buy” rating in a report on Monday, February 1st. One analyst has rated the stock with a sell rating, six have given a hold rating and five have assigned a buy rating to the company’s stock. The stock presently has an average rating of “Hold” and a consensus target price of $52.00.

The company also recently announced a quarterly dividend, which was paid on Tuesday, February 16th. Stockholders of record on Friday, January 29th were paid a $0.26 dividend. This represents a $1.04 dividend on an annualized basis and a dividend yield of 1.70%. The ex-dividend date was Thursday, January 28th. A. O. Smith’s dividend payout ratio (DPR) is currently 46.85%.

About A. O. Smith

Recommended Story: What are the most popular ETFs

Get a free copy of the Zacks research report on A. O. Smith (AOS) 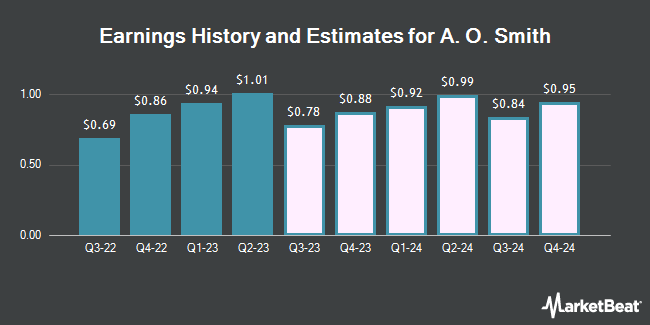 yieldfarming.insure Trading Down 9.7% Over Last Week