Complete the form below to receive the latest headlines and analysts' recommendations for ONEOK with our free daily email newsletter:

ONEOK (NYSE:OKE) posted its quarterly earnings data on Sunday. The utilities provider reported $0.69 EPS for the quarter, missing the Zacks’ consensus estimate of $0.74 by ($0.05), RTT News reports. The company had revenue of $2.57 billion for the quarter, compared to analyst estimates of $2.61 billion. ONEOK had a net margin of 7.24% and a return on equity of 18.38%. The company’s revenue was down 3.5% compared to the same quarter last year. During the same period in the prior year, the company earned $0.77 EPS.

The firm also recently announced a quarterly dividend, which was paid on Friday, February 12th. Stockholders of record on Monday, February 1st were paid a dividend of $0.935 per share. This represents a $3.74 annualized dividend and a dividend yield of 8.40%. The ex-dividend date was Friday, January 29th. ONEOK’s dividend payout ratio (DPR) is currently 121.82%.

ONEOK, Inc, together with its subsidiaries, engages in gathering, processing, storage, and transportation of natural gas in the United States. It operates through Natural Gas Gathering and Processing, Natural Gas Liquids, and Natural Gas Pipelines segments. The company owns natural gas gathering pipelines and processing plants in the Mid-Continent and Rocky Mountain regions.

Featured Article: What is a Reverse Stock Split? 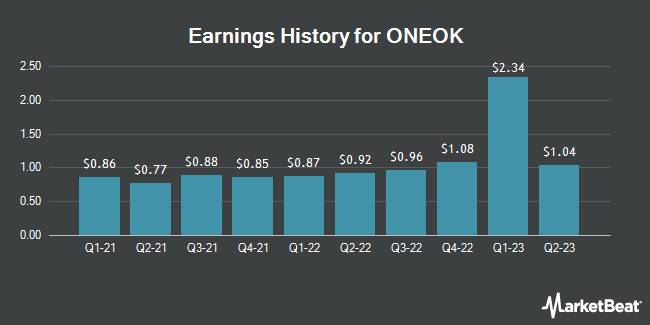 Receive News & Ratings for ONEOK Daily - Enter your email address below to receive a concise daily summary of the latest news and analysts' ratings for ONEOK and related companies with MarketBeat.com's FREE daily email newsletter.